Election Of City Council And Community Magistrate Conducted In Segeneiti 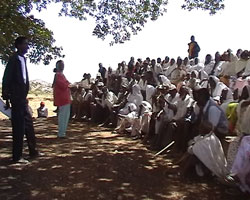 The Administrator of the sub-zone, Mr. Woldemichael Kidane, indicated that 85 city council members have been elected and are entrusted with the task of closely following up social issues in every administrative area, and thus work in collaboration with the concerned party in addressing them.

Meanwhile, election of community magistrates was carried out in the villages of Degra-Libie, Adengefom and Ewanet. Reports indicated that the inhabitants of the villages used to obtain administration of justice in a single community magistrate in Segeneiti town that was causing work load. The election would make due contribution in alleviating work load and enabling the public to obtain easy court service in their respective areas.

The local inhabitants expressed satisfaction with the opening of magistrate court and the setting up of city council in their respective villages.