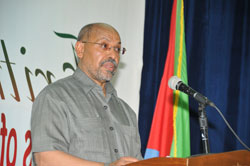 Different study papers focusing on the development of the variety of energy sources were presented today at the symposium of the Ministry of Mining and Energy underway in Massawa under the theme, “Eritrea: 20 Years of Dignity”.

Massawa, 30 March 2011- Different study papers focusing on the development of the variety of energy sources were presented today at the symposium of the Ministry of Mining and Energy underway in Massawa under the theme, “Eritrea: 20 Years of Dignity”.

In a paper presented by the head of the hydrocarbon department, Mr. Teklehaimanot Debretsion, the history of fuel exploration in Eritrea was extensively discussed. The study paper also explained that the Ministry had in the past 20 years prepared technical data of international standard and that it had signed three different exploration agreements whose geological and geographical information have been carefully documented. Mr. Teklehaimanot also pointed out that a number of important tasks remain before effective work can be achieved in the department.

Stating that a number of tasks have been accomplished in exploiting renewable sources of energy, Mr. Nebi said that wind turbines in Assab cover 20% of the city’s electricity consumption and that additional turbines with a capacity of up to 30 Kilowatts have been installed in Edi, Berasole, Beilul, Rahaita, Gahro and Dekemhare.

Moreover, Mr. Nebi explained that around 3,000 solar panels have been installed in different parts of the country producing more than 12,000 Kilowatt power and that 65% of remote areas in the country have become beneficiaries of power generated in such manner. More than 80,000 smokeless ovens, which reduce wood consumption by 50%, have also been distributed around the country, he added.

In the study paper presented by the head of geothermal energy, Mr. Ermias Yohannes, it was pointed out that exploration activities were carried out in collaboration with different companies in a bid to introduce such services and that priority is being given to producing the relevant skilled man power so that the existing potentials can be exploited based on internal capacity.

In a statement he made at the opening of the symposium, the Minister of Mining and Energy, Mr. Ahmed Haji Ali stated that extensive efforts are being made to ensure efficient supply of electricity in all parts of the country.
Emphasizing that the success of development endeavors are determined by the investments in the energy sector, the Minister said that the activities to ensure equal distribution of resources in all parts of the country will be further strengthened. The experience gained so far in mining and studies made in land structure are limited and hence more investment is required to promote the role of mining in the country’s economy, he added.

Election of Councils And Reconciliation Committee Members Conducted In Adi-Keih