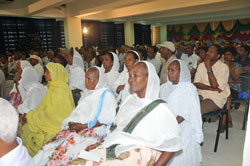 The symposium of the Ministry of Mining and Energy that had been underway in Massawa from 29 to 31 March under the theme, “ Eritrea- 20 Years of Dignity” concluded today.

Massawa, 31 March 2011-  The symposium of the Ministry of Mining and Energy that had been underway in Massawa from 29 to 31 March under the theme, “ Eritrea- 20 Years of Dignity” concluded today.

The national symposium that had continued for three days entertained study papers on the work accomplishments in the mining and energy sector, challenges encountered, goals achieved, available resources, traditional mining and its consequences and future plans of the sector.

In a statement he made at the conclusion of the symposium, the Minister of Mining and Energy, Mr. Ahmed Haji Ali expressed appreciation to all those who strived for the success of the meeting and noted the importance of such an occasion that provides an opportunity for service providers and customers to come together and deliberate on matters of relevant concern. “The presence of students and other young participants is particularly important for they would be able to understand the extent of available resources and the challenges being encountered,” he added.

Meanwhile, in a paper he presented at the symposium, the director general of the mining department, Mr. Alem Kibreab stated that intensive efforts had been made based on clear policies to exploit existing natural resources and ensure the benefits trickle down to the general public uniformly. Mr. Alem indicated that geological, geochemical and geophysical studies were made in the past 20 years and that stable political atmosphere and corruption free administration make Eritrea conducive for investment.

Stating that although accomplishments in the mining sector have not been as desired, Mr. Alem noted that commendable work has been achieved so far.  “20 years is not a very long time when talking about the mining industry. However, we have determined that there exist enough natural resources that can be mined for considerable income,” he added. The director general finally explained that satisfactory work has been accomplished in developing skilled human resources, which will in the future be further strengthened.

A study paper on traditional mining systems and their negative consequences was presented during the third-day of the symposium. The director of geological studies, Mr. Asmerom Mesfin indicated that traditional mining activities are carried out in different parts of the country and that such practices are not environment friendly in addition to hampering modern ways of mining. Talking about the factors that lead to traditional gold mining, Mr. Asmerom said that dwindling agricultural production, drought, the fact that gold can easily be identified, traditional gold mining equipments are easily available and exaggerated rumors about gold abundance have prompted 11 to 13 million people around the world to engage in such activities.

Furthermore, Mr. Asmerom emphasized that the Eritrean government is committed to ensuring equal distribution of natural resources among the people and that no one is allowed to engage in mining activities without a legal permit. He went on to underline that remedial measures such as improving the lives of traditional miners and familiarizing them with mining laws and policies should be taken to minimize the effects of traditional mining.

Eritrean National Interests Prioritizes The Interests Of the Youth