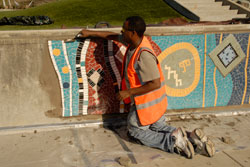 According Yeggy, art is not a beautiful painting rather the feeling and emotions an audience gets from looking at a painting. As a result, “Art is a philosophy with respect to space, time and color,” he said. Yeggy also explained that art is the emotions of an artist captured in a canvas which conveys those emotions to the audience. The aspiration and emotions of the artist must be expressed in the painting in addition to the technical aspect of a painting.

For Yeggy paintings are his therapy in which he expresses his feelings: as a poet expresses his/her feelings in poem and a singer in lyrics. The communication is between him and his canvas and when people see the emotions in his paintings they will have their own connections to those feelings. Many of Yeggy’s fans and fellow artists say that his paintings usually express tranquility, peace and love. When asked about such comments Yeggy says that, “it is because I paint what is inside me: if I were in a different situation like confusion, disappointment and depression my paintings would have been different.”

Yegzaw Micheal is an Eritrean living in Seattle and has been working as an artist in painting and public art. His work in public art is quite different from his paintings. He explained that in painting it is the connection of the artist with his/her canvas, but in public art the artists has to  consider the values and norms of the society. He also pointed out that in such occasions despite the environment he lives in; he tries to include some of the Eritrean culture.  “I try to put things like Tigrinya alphabets or some traditional equipments incorporated in the art, because public art lives for decades and whenever the audience looks at the piece, they may notice the little things added and know something about Eritrea and the Eritrean culture.”

Yeggy won “The Best Artist of the Year” in 1995 in Kenya as he has been working as an artist in the country in the 1990s. He also has won the “Raymok” for two consecutive years, 1996 and 1997 for paintings entitled “Negdet” and “Life Metaphor”.  Talking about what has inspired him to draw those two paintings, especially “Negdet”, he said: “I grew up in Ethiopia and had come to Eritrea in 1996. Everything in my home country was new to me, and “Negdet” was something unique where residents of the one city flock to one particular part of the city and spend a day in the houses of relatives and friends to celebrate the day.”He also said that there are various kinds of gatherings in the different societies of the world, but having a gathering of such extend in people’s own homes is very rare and that inspired him to paint “Negdet”. “I didn’t try to explain “Negdet” in the painting but just the feelings I experienced when I saw such event that demonstrated the unity and common values of the society,” he added. Yeggy had an exhibition in New York University in 2009. His paintings, “Interconnected” and “Endless Prayers” were most popular during the exhibition. “Interconnected” is a painting of people with few legs and more heads which explain despite our cultural, economic and political differences deep down human beings are the same.

Yegzaw has been in homeland for four months now and is trying to introduce public art among the artists of the country. During his stay here he appreciated the talents of the young artists in the country although he says there is lack of equipments and exposure and called upon concerned parties to get involved in promoting art in the country. “I am sure that those young artists can be talented artists in the future especially if they get the right exposure and guidance,” Yeggy said.