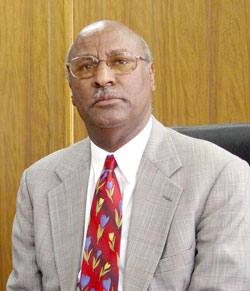 In connection with the upcoming symposium of the Ministry of Agriculture to be held in Barentu from 4 to 6 April, the Minister of Agriculture, Mr. Arefaine Berhe conducted an interview with ERI-TV as regards the agricultural activities in the last 20 years of independence. Excerpts fellow:

Let’s start with the ministry’s principal objective?
The main objective of the ministry is ensuring food security in a manner that satisfies the demand for nutritious food supply locally and to go beyond subsistence based agricultural activities so as to undertake agricultural activities for export. Moreover, our priorities also include tasks that are aimed at restoring the environment to its natural state, enhancing production of agro-industrial ingredients, as well as promoting export of agricultural productions.

What do we mean by ensuring food security?
Any member of the Eritrean society should get nutritious food supply at a fair price. This is not; however, the end goal but reserving food supply and cultivating cash crops for export so as the agriculture sector could play a deceive role in the nation’s economy.

Taking the pros and cons of the climate of the region into account, are Eritrea’s natural resources favorable for major agricultural undertakings?
When speaking about agricultural undertakings, we need to take into account the factors that influence agricultural yield. The major factor is indeed the provision of water. Even though enough in amounts, uneven distribution of seasonal rainfall has been negatively affecting the agricultural output. Traditional farming, diseases and insects, poor soil condition have also their own impacts. Endeavors of the last 20 years have been therefore in addressing such challenges.

What was the policy and strategy the ministry pursued to develop agricultural infrastructure?
Prior to independence there was almost no agricultural activity. Most of the Eritrean people were displaced here and there; farm lands were infested with landmines, farmers did not have enough seeds, there were no farming tools and, in short, we started from zero. Hence, from 1991-1993 was the revitalizing period through the distribution of seeds, farming tools, fertilizers, pest and herbicides as well as  motorized water pumps. And then in 1994, the ministry worked on the development of human power through a 6-month training offered to around 1,000 people who were later deployed throughout the country. Another area of agricultural undertaking was the development in water provision thorough concerted efforts made in water and soil conservation which include forestation, construction of terraces, establishment of dams and micro dams, water diversion canals among others.
Speaking of livestock, rinderpest which was eradicated through intensive compulsory vaccination in the time between 1994 and 1997 was among the serious diseases. Infestation of pests used to pose considerable threat to the overall agricultural output. Such a challenge was surmounted through the proper utilization of pesticides. A number of test sites were also opened in different corners of the country. Students graduated from agricultural colleges of Hamelmalo and Hagaz have also increased the number expertise in the agriculture sector.

In the period from 1998-2004 the introduction of collective farming system could be cited a significant experience. The construction of water reservoirs through active engagement of local construction companies, establishment of research centers for the development of veterinary services as well as processing of and cultivating of animal feed so as to boost milk production in an enhanced manner is among the major efforts. Poultry has shown advancement within the aforementioned range of time through the establishment of small scale poultry industry.

What measures have been taken to raise farmers’ awareness on modern agricultural techniques?
A farmer needs to have advanced technological know-how in every agricultural undertaking. About 5% of farmland has been cultivated through irrigation; and about 30% of land has been cultivated through the assistance of agricultural machinery. Substantial investment is a necessity prerequisite for considerable amount of production. Farmers in this country have gained valuable experiences through varied trainings that have been offered as well as through their collective experiences acquired during the engagement in agricultural activities.

Which agricultural sub-sector do you believe is more promising?
The major potential of the country in which we could succeed with less labor is in fact, the cultivation of vegetables, fruits, horticulture and in livestock production. For crop production, the ministry has been focusing on the cultivation of drought resistant crops such as millet and sorghum that could grow in arid and semi-aired areas.

Has the substantial investment made in the agriculture sector over the past 20 years been rewarding?
As I mentioned earlier, food security is comprehensive concept that includes sustainable supply of nutritious food items. There has been production boost in the case of fruits and vegetables. At present we don’t have scarcity of fruits and vegetables in market places. Speaking of livestock, concerted action has been taken to enhance the availability of green meadows through soil and water conservation activities. Nevertheless, there is vivid deficit in milk production. Likewise, we have not yet met the demand for food supply. We have been cultivating about 500,000 hectares of land. To meet the demand we need to cultivate about 1,000,000 hectares of land through irrigation system which demands huge amounts of water. Generally speaking, we haven’t succeeded as envisaged. For instance, we need to cultivate more vegetables, fruits and horticulture that are aimed for export purposes. We also need to construct more water reservoirs.

Agricultural activities are highly costly; does the government make subsidies to promote the sector?
The government has been constructing water reservoirs, a number of power plants have also been introduced in different parts of the country. More importantly, it has been working towards securing energy supply. Such activities are indeed among the major implementations to promote the agriculture sector that goes along with the overall developmental undertakings.

What are the advances made in agro-industrial activities such as sugar and cotton production as well as the BANATOM factory?
Gherset and Fanko dams have been used to cultivate cotton, sugar cane and tomatoes. Sugar production has shown promising result in the experimental sites in Afhimbol and we have been able to produce to the extent that would satisfy local demand as well as for export. The upper body of sugar cane is a rich animal feed and the rest part can be utilized for energy purposes. Cultivation of tomato is aimed at supplying the BANOTOM factory.

What are the plans outlined for the next five years?
Concerted efforts would be made in water and soil conservation. Additional water reservoirs and store houses would be constructed in different parts of the country. Ago-industrial plants that manufacture tubes for drip and sprinkler irrigation would be established. Veterinary services would also be greatly improved.

Agriculture: The Basis for All-round Development