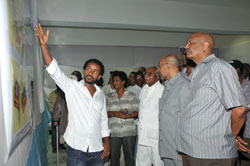 It has been proven that Eritrea possesses valuable gold, iron, potash, copper, zinc and other land and marine natural resources. For centuries, the natural resources remained unexplored and unexploited.  The exploration and exploitation carried out with limited capacity at different times were hampered due to war and other reasons.

Nevertheless, the process of utilizing the available resources has been revived over the past 20 years of independence with the vision of benefiting the society’s interests. The Ministry of Energy and Mining (MoEM) has been vigorously exploring and developing ways of proper harnessing of natural resources so as to maximize its impact in economic progress of the country. On top of this, the MoEM is striving to ensure efficient and reliable supply of energy in the entire county so as to narrow the gap between rural and urban areas. It was regarding this and the task accomplishments as well as shortcoming of MoEM to achieve these goals in the past 20 years that a symposium was held in the port city of Massawa.

With the opening of an exhibition by Minister of MoEM, Mr. Ahmed Haji Ali, the symposium of MoEM began on March 29. The exhibition portrayed the efforts carried out to develop renewable sources of energy, geological map of Eritrea, mineral concession of Eritrea, procedures for permitting of mining projects and Bisha Mining Share Company, among others.

In a speech he made at the meeting, the Minister said that efforts are underway to ensure efficient supply of electricity in all parts of the country. He pointed out that success of development efforts are determined by the investment in the energy sector and that activities to ensure equal distribution of resources in all parts of the country would be further strengthened.  The experience gained so far in mining are limited hence more investment is required to promote mining in the country’s economy, he added.

A 45 minutes documentary film on the 20 years journey of MoEM was presented which highlighted the structure of the Ministry and the tasks accomplished and challenges it encountered, as well as future work programs.
In a study paper presented the next morning by geophysical engineer, Mr. Tekle Debretsion, director of Hydrocarbon Division in the MoEM, gave briefings on the history of oil and gas exploration in Eritrea.  He said that almost a century has passed since exploration in the Red Sea Coast began and several oil and gas exploration companies had conducted surveys. The findings indicated the availability of petroleum in the area in view of the fact that the neighboring areas are endowed with such resources. Hence, important information and experiences have been obtained over the past two-decades that could reinforce further explorations, the report indicated.
“The MoEM drafted legal and technical documents that meet international standard, and four explorations wells have been drilled and all the geological and geophysical information gathered there has been preserved. Some evidences are found that there could exist petroleum in the water body of Eritrean Red Sea and around the Dahlak Island.  Thus, efforts are needed to ensure the availability of these resources and properly exploiting them,” Mr. Teklehaimnot said.

Following this, Eng. Nebi Ghebremedhin, the director of renewable energy center, talked about the status of renewable energy in the country. This center was formed in 1994 and survey was conducted for the first time regarding the use and consumption energy supply. According to the survey, 95% of energy supply is obtained from biomass, which inflicted enormous damage to the country’s forestry and wildlife. Searching for other alternative energy sources to reduce import of fuel for electricity generation became the best option. As a result, 25 meteorology stations were installed in different parts of the country from 1999-2005 to study the availability of solar and wind energy sources in Eritrea. It was confirmed that there exists high wind speed that could produce enough amount of electricity energy in various parts in particular in Southern Red Sea region and some parts of the highlands.

Accordingly, three wind turbines that could generate 250 KW of energy worth 2.2 million USD were installed in Assab in 2007. These turbines are covering 20% of fuel consumption used for electricity generating and the outcome is very encouraging. Eng. Nebi further said that seven turbines with a capacity of 3-30KW have been installed in Edi, Berasole, Rahaita, Gahro and Dekemhare for electricity generation and water pumping purposes. As regards to solar energy, 3,000 solar panels were installed with a capacity of generating 1,200 KW energy. In this respect, 65% in the remote area of the country have become beneficiaries. In terms of hydropower, ocean wave energy, ocean tidal energy and other natural alternative energies are available; further surveys are required to determine the amount of potential the country possesses in this sector. “Searching and developing other alternative sources of energy is timely required. Exploring these resources is vital to secure energy supply, exploit natural resources properly, reduce fuel expense and reduce environmental pollution,” Eng. Nebi said.

Moreover it was indicated in the study papers that more than 80,000 smokeless ovens have been distributed in different parts of the country which reduced wood consumption by 50%. Besides, the oven is playing significant role in reducing diseases caused by traditional ovens. The replacement of one oven by smokeless oven would reduce the emission of 0.6 tons of carbon dioxide per year, according to the report. “ This oven was awarded by Ashden Awards, special reward  and one million yen in Japan Expo 2005, Teck museum awards in 2006 US and Green Apple award in 2010,” Eng. Nebi disclosed in his presentation.

In a similar report presented by geologist, Mr. Ermias Yohannes, head of geothermal hydro-geology, briefings were given regarding the history of exploration of geothermal energy and its present status in Eritrea.

“Beginning from 1902 various geothermal surveys have been conducted in Eritrea. Based on these studies, the technical and geological location of the Dankil Depression, particularly Alid and Nabro-Dubbi are identified as potential areas for the availability of geothermal energy,” he said. “It is predicated that there might be reservoirs reaching up to 250 degree centigrade in Alid. The geological and structural survey also analyzed that there exist about 70 fractures. Thus, plans have been outlined to harness the availability of geothermal resources. Priority is given to nurturing skilled manpower so that the existing resources could be harness on the basis of internal capacity.”

In the afternoon hours, the journey of 20 years of Mining Department was presented by Mr. Alem Kibreab, the Director General of Mines Department, He pointed out that the history of mining in Eritrea began in 4th Century BC during the reign of the fourth Pharaoh and showed progress with the coming of Portuguese colonization in the region in the 17th century. Modern traditional mining was introduced during Italian colonial period. Prior to the WWII, more than 20 small gold mining companies were engaged in mining activities and the Italians had conducted surveys on extensive areas in order to identify mineral resources. After WWII, the mining activities continued with very limited capacity.

In the wake of independence, new policies and strategies were drafted that lead to a new stage in the mining sector. The government began conducting geological surveys to gather information on the magnitude and variety of the available resources in the country.  “These were aimed at boosting the mining profits for the economic development of the nation and thereby improve the living standard of the people. It was also working on creating conducive grounds for investors,” Mr. Alem said.

According to Mr. Alem, the activities of mining department could be categorized in two phases. In the first phase, the ministry and department were formed, previous data were gathered, policies and strategies were outlined and potential human power was organized.  It also identified sites that could be surveyed on the basis of internal capacity. Moreover, geological and economical researches were conducted in different places, and geological map of Eritrea was drawn, among others. In the other phase, efforts to encourage foreign investors resulted in fruitful outcomes.  Bisha and Bakura sites were transformed from exploration to mining. The resources there are high grade gold, copper and zincs deposits, i.e. 1.06 million ounces of gold, 9.4 million silver, 734 million Lb. copper, 1.075 million Lb zinc. Prospective sites are being identified in Embaderho, Koleli and Hambok.  Currently, 20 exploration companies including one mining are licensed to work in Eritrea. The feasibility studies in Zara gold deposit have concluded.

“Various companies are carrying out geological, geochemical and geophysical researches including drilling studies,” Mr. Alem stated. “Many of them are using airborne geophysical methods to gather extensive information so as to select sites for drilling.”

In the study paper, it was disclosed that about $354,156,000 have so far been invested on surveying and exploration activities over the last 20 years. There is a plan to invest around $ 23, 650,000 for surveying and explorating as well as $76,000,000 for mining. In addition, a plan has been mapped out to allocate about $121,987,046 to transform Zara Project into mining. In general, Mr. Alem said that Eritrea is attractive for investors because the necessary basic infrastructure facilities are being laid and resources are still unexploited. The prevalence of peace and stability as well as minimal corruption, clearly stated mining regulations concisely stated are some of the factors that encourage investors to invest their capital in Eritrea. “20 years in mining sector is not a long time, the achievements registered would add impetus for future endeavors,” the director general noted.