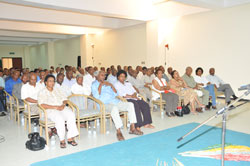 A third consecutive national symposium was conducted in Massawa port city successfully from April 2 to 3. In this symposium of the Ministry of the National Development, four study papers were presented and an exhibition depicting the activities of the Ministry was showcased.
At the opening of the two-day symposium, the Minister of National Development, Dr. Giorgis Teklemichael, gave extensive briefings concerning the objectives of the Ministry including the national development plans, regulating and evaluating strategies, gathering statistical data and enhancing international cooperation. He also stated that developing manpower capacity, resources allocation, deployment of investment and defining policies pertaining to the role of the private sector are some of the activities of the ministry. Moreover, Dr. Giorgis disclosed that Eritrea pursues a policy of mixed economy in which the state and private sectors are complementary.

In a study paper presented by Mr. Kidane Tsegai, director general of Eritrean Community Development Fund (ECDF), the tasks accomplished in recovering socio-economic capacity of the country over the past 20 years were discussed. He pointed out that the Government of Eritrea formed a relief and rehabilitation program in 1993. The basic objective was to vitalize the agricultural industry, boost economic capacity and construct economic infrastructure facilities. “Some of the undertaken activities include strengthening agricultural plant, distributing spare parts and raw materials to government and private sectors.  It also strives to upgrade human capacity and provide construction facilities for the development of infrastructure. As regards the rehabilitation process, community based social and economic rehabilitating programs were developed and expanded,” Mr. kidane said.

Despite various constraints encountered, the program implemented had registered satisfactory outcomes particularly in stimulating economic activities and expanding social services to peripheral areas. This program was closed in 1996 and a new program named Eritrea Community Development Fund (ECDF) was created in its place. The objective of this program is to bring about tangible socio-economic changes in the lives of war victims. It particularly focused on executing social projects; preserving natural resources, construction of community economic infrastructure, introduction of saving and micro-credit program, besides human capacity building. This program has thus far executed a total of 273 projects worth 76.4 million dollars since its establishment.

Also, Mr. Aynom Berhane, acting head of the National Statistics Office (NSO), gave briefings regarding the structure of the office and its significance in making decisions and outlining policies based on gathered data. The NSO conducted a poverty appraisal in 1993 in collaboration with the World Bank, Eritrean household income and expenditure survey in 1995-1997 carried out in 12 cities of Eritrea. Furthermore, a survey on living standards measurement w

as conducted in 2002/3 in the whole country aimed at gathering accurate information and prepared a poverty reduction strategic paper. From time to time this office has been engaged in conducting demographic survey to gather data and disseminate information to different bodies. “NSO jointly with partners has prepared data analysis of the population in terms of gender and distribution in the regions. This was submitted to concerned bodies to assist them in the decision making process. Another preliminary report survey in 2010 regarding population and health status was also carried out,” Mr. Aynom said.

“Over the past 20 years, the office increased its staff members, conducted extensive statistical surveys, set up statistical office in various institutions and upgraded capacity of technological information. It also has provided technical assistance focusing on gathering information, analyzing data and preparing advanced computer technology,” Mr. Aynom noted. “Distributing major findings to the society, inventory of data sets inside the country, developing common national database that has economic and social indicators are part of the NSO future plans,” he added.

On the next day of the symposium, Mr. Gebremichael Mengistu, the Director General at the ministry, presented a study paper on Emergency Reconstruction Program. He said that this program commenced in the wake of the TPLF regime’s third offensive. This program was aimed at beginning the process of long-term reconstruction and economic recovery process, while tackling the immediate needs of the most of vulnerable people. The war has caused extensive socio-economic destruction and inflicted devastating humanitarian impact. In a research conducted by the University of Asmara, the damage inflicted in Gash-Barka and Southern region alone was estimated around USD 564 million and caused a displacement of 1.1 million people.

The program comprised of 5 components namely agriculture, infrastructure, reconstructing the private sector, social provision and balance of payments support as well as sub-components. The implementation of the program commenced in 2001, whilst the situation in the country was caught between no-war and no-peace state, drought and destabilization of macro-economic. In spite of these impediments, the outlined programs were successfully carried out in terms of relevance, effectiveness, sustainability, impact and capacity building.

“We gained a great deal of experience and realized  how vital this program was in rehabilitating displaced citizens, the importance of giving special focus to women exposed to war and effectiveness of following harmonized procedures, ” Mr. Gebremichael.

In the final study paper presented by Mr. Kidane Tsegai on saving and micro-credit program, it was stated that the program was set up in 1996. The program is aimed at promoting the private sector, expanding small business and creating grounds for individuals and organizations to increase their income. The program has also enabled many nationals in remote areas who previously had no access to loans to benefit from the program.

Mr. Aynom further stated that there is five-year strategic plan that includes expanding the program, increasing the number of clients, strengthening internal supervision and raising the rate of returns to 95%.