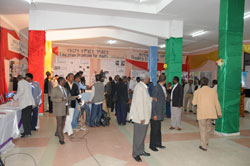 The symposium of the Ministry of Agriculture which had been underway in Barentu town under the theme “Eritrea: 20 years of dignity” concluded today.

Barentu, 6 April 2011 – The symposium of the Ministry of Agriculture which had been underway in Barentu town under the theme “Eritrea: 20 years of dignity” concluded today. In the course of the three-day symposium, study papers focusing on the policies and strategies for the agriculture sector, crop cultivation,  agricultural research, human resource development, promoting animal resources and the work accomplished so far were presented.

In a study paper presented by Mr. Kahsai Negash, head of milk production and animal resource expert unit, pointed out that dairy breeding was previously restricted to few places, and that livestock used to travel long distance in search of food and water. As a consequence of that, milk production declined to a bigger extent. After independence, however, livestock production increased double-fold thanks to strenuous endeavors made in livestock breeding, wildlife conservation and the cultivation of meat and hides, Mr. Kahsai indicated. Moreover, conducive ground has been laid to develop animal feed through irrigation, he added.

Accordingly, the numbers of cattle in the country registered 136% growth and that milk production rose by 75% respectively. As regards steps taken to ensure animal health, modern laboratory facilities, 68 veterinaries clinics and related 7 facilities were constructed with satisfactory outcome. Furthermore, training courses were organized in collaboration with the Hamelmalo College of Agriculture and the Technical Agriculture College in Hagaz. Stating the activities carried out in bee farming and poultry, Mr. Kahsai indicated that honey production has increased by 129% and that of egg increased double-fold.  He also outlined a 5-year strategic plan, including the of construction of modern livestock breeding center, and developing cattle dairy production, in addition to controlling animal diseases.

Similarly, the director of crop and animal development, Mr. Bereke Ogbamichael, presented a study paper on crop, fruits and vegetables farming. He said that 90% of the extensive agricultural land in Eritrea relies on rain waters and that the remaining 10 % is cultivated through irrigation. Hence, efforts are underway to introduce and develop irrigation farming in view of the fact that rain-fed agricultural production is not that productive, Mr. Bereke elaborated.

As regards the strategic plan of crop cultivation, he explained that major food security programs have been implemented which focus on boosting farm production, introducing advanced technological know-how, improving agricultural methodologies,  promoting irrigation farming and  upgrading human resource capacity, among others.  Parallel with the symposium, an art exhibition highlighting the activities of the Ministry over the past 20 years was staged.

In a closing speech, the Minister of Agriculture, Mr. Arefaine Berhe, noted that the study papers presented and the art exhibition staged amply demonstrated the achievements registered in the agricultural sector since independence. He further explained that the experience acquired so far would provide added impetus to endeavors aimed at achieving more gratifying outcome.