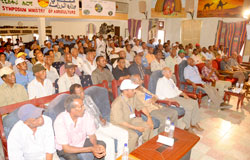 Through a can-do spirit great achievements have been registered in the agricultural sector. Though the accomplishments attained so far have not yet met the envisaged goals, agricultural undertakings accomplished in the last 20 years have laid a good foundation for a higher degree of achievement. A three day symposium of the Ministry of Agriculture, conducted in Barentu highlighted the tangible achievements that have been registered, the challenges that were encountered during the course of implementing varied programs and the future plans of agricultural sub-sectors that are in line for implementation in the coming 5 years.
Known for its abundant agricultural productions, Gash-Barka hosted the symposium that dealt with activities of boosting agricultural yield, enhancing agro- industrial projects and bringing solutions to the hurdles that have been preventing agricultural sub-sectors from progressing.

The symposium, which was held at the hall of the National Union of Eritrean Women in Barentu, the Minister of Agriculture, Mr. Arefaine Berhe, gave introductory remarks about the four main phases in agricultural endeavors.

He briefly stated that the phase between 1991 and 1993 was a revitalization period of the agriculture sector that had started from scratch. The second phase from 1994-1997, was a period in which extensive soil and water conservation activities, construction of water reservoirs in different parts of the country were carried out. The third phase from 1998-2004 was also a period in which good experiences in collective farming and the introduction of advanced agricultural mechanization impacted the scope of agro-industrial activities began to flourish. As such, small scale poultry industries were established, honey bee farming significantly grew with the distribution of about 20,000 bee hives as well as distributions of selected seeds of cereal crops, fruits and vegetables.

It was also outlined that through the research and experiment activities some imported cows that were identified for their plentiful milk production were distributed to farmers. A large area of farm land has also been cultivated thorough the utilization of advanced irrigation system to ensure sustainable supply to the agro-industrial plants.

During the duration of the symposium, the agricultural policies and strategies that have been used as guiding principles to the overall agricultural undertakings were also discussed. Such policies mainly focus on judicious utilization of resources that correspond with the needs and interests of the Eritrean society, however in a manner that maintains balance on demand and supply.

In the symposium, the director of Planning and Statistics at the Ministry of Agriculture, Mr. Solomon Haile said that various research programs have been carried out to identify agricultural resources that would play an important role in boosting production through technological assistance. Parallel to the aforementioned programs, intensive demand driven counseling and awareness raising services have been offered through extension programs. Besides, agricultural researches and experiments aimed at conserving and developing healthy livestock species and vegetation was among the main objectives of the ministry that has been carried out along with sustainable human power development programs.

Taking into account that agricultural experiment plays significant role in enhancing farming production, Dr. Eyasu stated that gene banks that preserve varied species of  vegetations and other experiment related agricultural infrastructure has been put in place in the last 20 years of independence.

As a result of the research and experiment activities that have been carried out about 30 species of cereal crops, 16 species of vegetables and 7 species of fruits that are identified for their resistance and good productivity have been distributed. These efforts are in turn are making due contribution in the reduction of market crop prices.

Moreover, according to Dr. Eyasu, following continuous research and experiment that have been conducted at varied testing sites and in different soil textures, about 39 vegetation types which showed promising resistance capacity and good productivity would be distributed to farmers. Besides, comprehensive diseases control efforts and human power development programs are among the major plans outlined to be implemented in an enhanced manner in the next five years.

Conservation and development of natural resources that include development of animals and vegetation resources were part of the discussion points in the symposium. The symposium therefore, clarified on the conditions of some indigenous vegetations and wild life that are at the verge of extinction. In addressing such challenges the department for the development of natural resources has been engaged in research activities through which identified natural habitat of elephants that are issued to be part of the national park.

Since the department is concerned with keeping the bio diversity intact, 50 green clubs have been established throughout the country.- Activities of forestation and  preservation of vegetations through issuing regulations for the establishment of enclosures has been part of the comprehensive endeavors in the development of natural resources.

The Agriculture ministry’s symposium that continued for three days came to a conclusion in the afternoon hours of 6 April after discussions on varied topics of each agricultural sub-sector.

The symposium concluded after deliberations on future agricultural policies, trends and guidelines for human resource development. Emphasizing the tremendous agricultural achievements registered so far are mainly the outcomes of the hardworking farmers of the nation and harmonized inputs of partners, it was underlined that the symposium has been a good platform for evaluating past achievements, challenges and future trends of the agricultural sector in our nation.