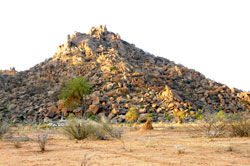 Gash Barka region as a place of huge developmental activities in the country it is, it is also the place where the spark that led for thirty years of bitter struggle for independence was lit. When the Ethiopian regime, encouraged and backed by some international powers, broke the terms of the UN resolution condemning Eritrea to be forcefully federated with Ethiopia, reducing Eritrea to the status of occupied country, the Eritrean people had to go through concerted diplomatic efforts including by sending delegates to appeal that the UN body condemns the illegal measures being taken by the regime in Ethiopia.

All diplomatic efforts, however, received deaf ear by the international community. The only option that remained for Eritreans was, hence, to snatch by force everything that belongs to them. They had to rise against the evil act and intention of the regime in Ethiopia who adopted all means and ways of torture, intimidation, imprisonment, and mass killings. Under such circumstances the people of Eritrea had to exercise their right of self-defense.

To exercise such rights, however, there was the need of an organization or somebody to initiate the resistance. And that is here that the heroic history of Awate and his pioneers’ come. On September 1, 1961, mount Adal witnessed the birth of the long awaited event, the beginning of Eritrean revolution for independence. Ahmed Idris Awate with his thirteen comrades in arms made history in Adal with very poor preparations, in terms of arms, men, equipment and provisions. Whatever their situation was, however, they waged their first battle for independence against the Ethiopian occupation forces in Mount Adal. The struggle that was triggered at Adal took no time to spread to Eritrean activists living in the country and abroad. And those activists took no time to come forward and do their parts, some contributing what they had to the liberation struggle and some organizing themselves and search ways and means to accelerate the struggle that was in its infant stage.

The liberation struggle that triggered on September 1, 1961 came to an end on May 24, 1991, after thirty years of struggle, so much sacrifices, and heroic feats of the Eritrean People’s Liberation Front. Mount Adal a very strategic mountain in Gash Barka region has the potential of becoming one of the places of attraction for visitors, both local and international, researchers, who might be eager to study the beginning of the armed struggle, and for people who appreciate different kinds of landscapes. Adal a seemingly small hill is surrounded by around six huge mountains and is very strategic for military action, both for defense and attack.

Gash Barka is the region where the first modern mining industry of its kind is located. This mining industry has opened the prospect that Eritrea is also endowed with rich natural resources along with its hard working people and especially the youth we witnessed working day and night to put their country in the list of those countries that are developed and capable of feeding their people by not expecting hand outs from outside. The agro-industries, animal breeding, factories such as milk processing in addition to the mining industry will make Gash Barka region, for sure, the bread basket of Eritrea. And Mish-Allah it will continue growing and more precious minerals available and become the bread basket and commercial center of the region as a whole. The ancient palace and fortress of Degiat Gurja we visited at Tikul, Molqi, and the Holy place at Fode are places that need further research and study regarding their essence and meaning. Everywhere in Eritrea there are traces and history of Tigrian warlords invasion aimed at ransacking property and other things they find in their way. And these two places, Tikul and Fode, have similar history that we need to study and talk about.

Interview with Administrator of Gash-Barka region