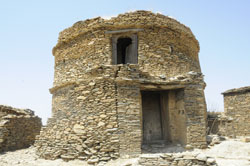 It is a two-storey structure, built around 145 years ago. The shape of the building, the materials it was built from and the place where this building is located, are all some of its unique aspects. The village of Tikul is located in the highlands of the Gash Barka region, south east from the town of Barentu in a distance of about three hours’ drive.

The two-storey circular building is located at the heart of this village and was built from small circular stones. No cement or any other material was used for the building but stone piled one atop another.  The ceiling is covered with countless rows of huge branches of trees. It also has windows at 45 degree facing to every direction.

The building is known as the f Degiat Gurja Fort. Degiat Gurja was born in 1845 in a place called Zaydokolom. At the age of 18 he become the administrator of his village and built this fort at the highest place of the area, Tikul village. He chose this place for his fort because it provides a far reaching scope of the entire area. Such precautionary measures were perhaps taken so as to protect the territory from the continuous incursions by the Tigrayan emperors. He used to live in the upper floor of the building known as “Biet Hari”. During his stay at the “Biet Hari” he would look through the windows and administrate the three villages and defend them from Tigrayan invasions. Deg’at Gurja is also renowned for his skills at the battlefield.

The building also has a hall used for meetings and entertainment purposes hosted by the Deg’at. Having being built only from piles of stones, this amazing building has defined time and weather and is standing at a remarkable shape a century and half later.

The porch of the building is a hallway which has a gate separate from the main door of the building. The doors of the building were built from trees of Awelie and Sagla. This building was constructed long before the coming of the Italians to the country but it used to have a generator, telephone and other music instruments.

Deg’at Gurja died at the age of 84 and has a number of descendants at present but there are no concrete studies that explain about his fights with the Italian colonizers, his exile to Tigray and his imprisonment in the island of Nakura.  There are various contradictory stories about his life but still detailed research is needed to know the real story.

There are also other similar tourist sites in the Gash Barka region, but still more information is needed in identifying those sites.