Interview with Administrator of Gash-Barka region 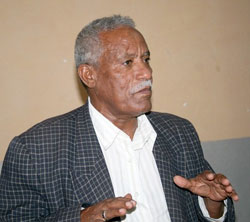 Gash-Barka region is the largest province in Eritrea sprawling over 37,000 sq. kms of land and inhabited by around 600,000 people. It has 14 sub-zones, 187 area administrations and 834 villages. The region has vast arable agricultural land that could yield harvest more than twice a year and three big rivers namely, Barka, Tekeze and Gash. Moreover, Gash Barka also occupies special place in the history of the country since the first bullet of armed struggle was fired there. Following the achievement of independence, various development projects have been carried out in the region that paved a way for modernization. The Administrator of the region, Mr. Musa Rab’a conducted an interview with ERI-TV in connection with the symposium of the region that was opened today in Barentu.

Let us begin with the history of the region before independence?

Until the achievement of independence, this region had been deprived of any development. The inhabitants were denied access to social services and isolated from the rest of the country due to lack of infrastructure facilities. They were exposed to displacement due to colonial oppression and were unable to harness the natural resources of the land. After independence however, the Government outlined major developmental programs and set about to implement them effectively.

What were the first steps taken to rehabilitate and develop the region?

Ensuring the expansion of social services and infrastructure facilities were the first issues that needed to be addressed. Through the continuous concerted endeavors of the people and Government, the number of schools which were limited to only 35 rose to 347 at present and student enrollment continues to gain momentum. The education for all policy is moving on the right track. Besides, 49 health centers including a referral hospital are playing due role in securing the health of the population. In this respect, the leading cause of death such as malaria, communicable diseases mother and child mortality rates in the region has declined remarkably over the past 20 years. Furthermore, 67% of the population has now access to potable water supply. As a result of these provisions, most of the inhabitants are now on the process of transformation from nomadic pattern of living to settled life.

How about the putting in place of infrastructure facilities?

A number of asphalt and dirt roads connecting every administrative area to others were constructed.  Renovated and newly built bridges are also playing significant role in alleviating transport problems during the summer time. Electricity supply and mobile telephone services were also distributed. Furthermore, various dams, ponds and agricultural infrastructures were put in place. Efforts are also underway to utilize the available water resources there for agricultural purposes in bid to achieve food security.

Tell us about the future work plans of the region’s administration?

Expanding social services and putting in place of infrastructure facilities would continue in reinforced manner. Farmlands would also be allotted so as to enable the inhabitants to become self-reliant.