Papers presented at Ministry of Land, Water and Environment symposium 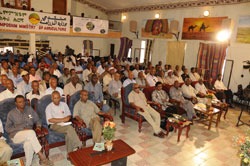 Papers focusing on the policies adopted and accomplishments registered  land and water resources development were presented at the symposium of the Ministry of Land, Water and Environment.

Barentu 12 April, 2011- Papers focusing on the policies adopted and accomplishments registered  land and water resources development were presented at the symposium of the Ministry of Land, Water and Environment.

In a paper he presented, the general director of the Water Department at the Ministry, Mr. Mebrahtu Eyasu, pointed out that encouraging achievements have been accomplished in the proper management and utilization of water resources over the past 20 years. He further outlined that only 7% of rural areas and only 30% of urban centers had access to water in 1991, whereas at present 75% of the population of the rural areas and 90% in urban centers have got access to water resources.

Mr. Eyasu also explained that by the year 2015, numerous projects such as water and atmospheric research, improvement of current garbage disposal methods, expansion of water provision facilities and geophysical studies in Sawa, Hagaz as well as Hazemo are to be finalized and are to be implemented.

The director general of the Exploration and Information Department in the Ministry, Mr. Tesfamichael Keleta, explained on his part that geological and hydrological studies were undertaken in 2,500 spots all over the country, and that studies have proven that the nation possesses underground water potentials to the tune of 1.7 billion cubic meters.

Also speaking in connection with water provision tasks, the director of the Water Provision Department, Mr. Misgina Gebreslasie, said that effective water distribution activities have been carried out since independence that enabled citizens to have improved access to potable water supply.

Similarly, the head of the Land Allocation Unit, Mr. Mulugeta Asmelash, pointed out that endeavors have been made in land allocation and the preparation of master plans, and also emphasized the need to coordinate planning and sorting tasks in the interest of present and future generations.

Also presenting a paper on the process of land allocation, Mr. Abraham Tecleab, department head in the ministry indicated that a policy of land allocation has been applied at the national level, the impact of which has already borne gratifying outcome.