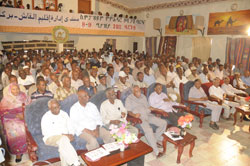 Substantially rich in natural as well as cultural resources, the Gash-Barka region covers Eritrea’s largest geographical area. One who travels to the region’s capital could easily notice the vivid changes the city has gone through in the post independence period by simply making comparisons between the old and the newly Barentu. Some areas of the city which used to be remote have now become the city’s central places. The city has developed and expanded immensely; so has the entire region which is referred as the land of opportunities.

Agricultural productions staged on the opening of this region’s symposium are indeed an epitome of the rich resources and demonstration of the region’ potentials. An exhibition that stayed open for two days of the symposium also gave pictorial examples of what has been implemented in the last two decades of independence.

The regional symposium held form 8-9 of April 2011 at the NUEW’s hall in Barentu highlighted to what extent such resources have been harnessed and what achievements have been registered in different sectors of social services. Any sector that determines socio-economic development as well as that could promote natural and cultural resources was severely hampered in the period prior to independence. Major tasks carried out in the wake of independence have been in restructuring and reawakening every sector.

The Gash-Barka region which is known for its vast grazing areas covers 44% of the nation’s livestock resources. This region which is also a habitat for indigenous vegetations and animals is a source of hope for pastoralists that travel from different parts of the country to feed their animals.

The exhibition staged and the papers presented in the symposium covered a wide range of topics. Real objects such as up to date medical equipment of ophthalmic services and others, seedlings, varied agricultural productions, handicrafts, different educational publications, and other displays represented the topics set for evaluation and discussion in the symposium. There were also presentations on agricultural development, administrative activities, advancement in the education sector and activities of NUEYS and the NUEW, devlopment in health care services, activities of Labour and Human Welfare, and engagements in the devlopment of general infrastucture were topics of the discussion.

As part of the comprehensive agricultural advancement, the number and quality of livestock has been gradually increasing through effective veterinary services. Sufficient number of veterinary specialists were trained and clinics opened for such services have been in active services. Prevention and control of avian influenza and vaccination services aimed at preventing spread of diseases has borne fruitful outcome. Veterinary services that were provided in three clinics and with only three doctors have now risen to 36 clinics and with 65 specialists. Contributions of such endeavors in veterinary services enabled Eritrea to be certified a rinderpest-free country in 2004. This achievement in turn would play supportive role in exporting livestock.

Crops, vegetables, and fruits cultivation has considerably impacted the sustainability of agricultural supplies. For instance, through irrigation based agricultural  undertakings about 250 kilos of tomato and 350 kilos of banana have been harvested per   hectare through the assistance of pivot and sprinkler irrigation systems that have been utilized in Gherset and Fanko. More than 1,100 hectares of farm land that was used for the cultivation of vegetables, has at this time reached to about 8,700 hectares of land of which the 610 hectares has been cultivated through advanced technological assistance. The Gash-Barka region is now providing 70% of banana supply throughout the country.

Natural resources and irrigation system development has been the major concern of the  region. It is only through the development of irrigation system that agricultural production would satisfy the nation’s demand. Aligidir water diversion canal was the  only water diversion system in the region before the independence period. This time  however 34 water diversion systems such as Agolit, Deresa, Guchi, and Berhatara river diversions among others were constructed in the last 20 years. Besides the construction of   six major dams at regional level, about 180 micro-dams were built and more than 2,000 wells were dug for agricultural purposes.

The development of general infrastructure in the region was also one of the   topics of discussion on which extensive deliberations were made. Poor qualities of infrastructure have been substituted with effective infrastructural projects implemented in the post independence period. Education, health care services, water supply, electricity, roads and communications facilities have been put in place. As such 41 large sized and more than 2,000 medium sized bridges have been constructed.

Furthermore, 93 health care facilities are rendering commendable services at present, 74% of the entire population of the Gash-Barka region have gained access to potable water supply. In line with the asphalting of roads that stretch from Agordat to Tessenei as well as the asphalting of about 2,000 km of dirt roads, 74% of the region’s geographical area has been able to gain access to transportation services. Likewise, the number of roads routes have risen from 4-46. Establishment of foam, pre-cast, concrete, animal feed processing, cotton and sugar factories have been established in the 20 years of development endeavors.

The commendable achievements registered in the region’s education sector is indeed one among the comprehensive undertakings. With the construction of educational institutions  that focused in remote parts of the region, a number of students who used to learn lessons in makeshift tents are now pursuing their education in a well equipped schools. In the year 2010, the number of improved educational institutions has reached 212 which cover 72.6% of the general access to education. The total number of educational institutions in the region, including secondary schools have increased from 60-341.  Taking into account the significance of educating elementary school students with mother tongue, a number of schools that provide lessons in mother tongue were opened. Concerted efforts have been made to improve students’ academic excellence, but there still remains a lot to be done so as to enhance the quality of educational services. 20 years of investment in the education sector has become a good foundation for future development of the sector. Nevertheless, access to education has increased where as supportive educational infrastructure have not yet been developed to a satisfactory level. Efforts to increase educational access are still making headway, accordingly through active engagements of communities 72 schools are being constructed in different parts of the region.

Besides the achievements in controlling communicable diseases, prevention of malaria, and activities of vaccination for children, the introduction of incubators for neonates, the establishment of ophthalmic surgery in Barentu referral hospital and the opening of new pharmacies in major hospitals of Agordat, Barentu, and Tessenei could be sited as substantial achievements in the regional health care services.

A two-day symposium of Gash-Barka administration also clarified on the activities of youths and women’s associations and their participation in organizational, political, social and economic activities.  These two associations have been engaged in offering trainings, giving loans and awareness raising activities.

Following cultural shows performed during the closing of the symposium, the administrator of Gash Barka region, Mr. Mussa Rab’a said that successive Ethiopian colonizers had destroyed any sort of infrastructure throughout the country. However, as a result of Government’s endeavors infrastructural facilities have not only been revived but have risen to a higher stage of performance.

Multiple Standards that Harbor Subversion of the Rule of Law