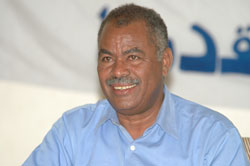 Knowing for its archeological and historical sites as well as geographical scenery, the Southern region is the most densely populated area in Eritrea. The merger of Seraye and Akeleguzay provinces has formed this region with surface area of around 10,000 square Kilometers. It is inhabited by around 175,000 families. Southern region is categorized into 12 sub-zones comprising 231 administrative areas. Blessed with suitable climatic condition and arable land, this region has better chance of obtaining adequate amount of annual rainfall. Hence, majority of the inhabitants have been engaged in traditional farming and pastoral lives for long period of time. After the achievement of independence, various development programs has been undertaken to change the living standard of the people and lead the region along modernization path. The upcoming symposium scheduled to be held on April 16-17 would review the task accomplished and challenges encountered over the past 20 years since the achievement of independence, as well as future work programs. In connection with this, Mr. Mustafa Nurehusien, Administrator of the region, has conducted an interview with ERI-TV. Excerpts follow:

Tell us the major development programs undertaken in agriculture sector over the past years?

About 2.2 billion Nakfa has been invested to develop agriculture sector in order to assist the society to raise productivity and maximize their income. Since the work in agriculture sector was immense, it became necessary to divide the task in various segments given main focus on cultivating cereals, fruits and vegetables. Along this, laying modern agricultural infrastructure was paramount to accumulate adequate amount of water, besides modernizing farming methods. For this reason, 107 dams were constructed after independence, in addition to the 31 previous built dams. 256 ponds with have capacity of holding 50 million cubic meters were also constructed. These water impoundment structures could cultivate over 5,000 hectares at a given time.

Already, encouraging task has been carried out in raising fruits and vegetables production, which is playing significant role in meeting local demands. A total of 10,000 hectares are accessible for fruits and vegetables cultivation in which 9,500 hectares for vegetables farming, whereas the remaining 1,065 hectares for fruits. It is possible to yield three times a year, and our effort is to assist farmers to harvest three times per year. Shops for farmers association are opened to enable direct interaction between suppliers and customers. The idea is to create viable ground for farming community and sell their products at fair price. I believe we have begun the journey and our vision is to properly cultivate the 50,000 hectares of potential agricultural land in the area.

What efforts have been carried out to encourage inhabitants to avoid merely depending on cereal agriculture?

Necessary platforms have been set for dairy farmers to boost their products.  For instance, an association of dairy farming comprising of 1483 members have been formed, and actively engaged in meeting local market demands. It is also exports 3,000 liters of milk to Asmara daily.  In general, over 2 million livestock are there in region, and farmers are obliged to cultivate 10% of their plots animal feed.   Meanwhile, we have 152 modern poultry farming plants in region, besides over half million backyard chicken. The sum of these poultry has made possible for the availability of eggs in the region any time. Moreover, 1,200 quintals of honey is produced annually from 14,000 modern and traditional bee-hives.

In line with the on-going agricultural activities, how do you assess the implementation of reforestation program?

The land mass of this region was heavily inflicted by drought and reckless cutting of trees. Thus, extensive rangeland was reserved; reforestation programs have been carried out in schools, health institutions and various camps. Rules and regulation regarding prevention were adopted and number of forest inspectors was promoted, On the other hand, we are striving to introduce and develop other alternative energy sources, since the inhabitants depends on biomass especially wood as source of energy.

Aside for this, explain to us how the endeavor to ensure social justice is progressing?

Parallel to the agricultural endeavors, a total of Nfa. 2.7 billion has been disbursed to put in place infrastructure facilities. Roads connecting remote areas to main towns were constructed, 75% of the inhabitants have become beneficiaries of telephone service.  Furthermore, 50,000 of the people are able to obtain power supply as well as 73 % of the population is able to obtain potable water supply.

Regarding to the achievements registered in health services, the number of health institutions has rose from 27 to 88. As a consequence, the previous common diseases have dropped considerably. Public attitude towards the advantages of modern health service has changed. The previous shortage of skilled health personnel is being addressed thanks to the nursing school in the region and other medical schools.

On education sector also, student enrollment has reached to 200,000 and number of teachers has increased to around 4,000. The construction of schools has risen from 101 to 411. As a result of the relentless efforts, around 6,000 students are able to join Sawa Warsai-Yikaalo School for matriculation examination. Still, there are issues that need to be tackled such as low female participation, shortage of teachers and so forth and our plan is to address these issues with a  view to minimize illiteracy.

What are some of the major future work projects outlined?

We would reinforce our endeavors to enrich water resources in bid to put under cultivation the unutilized fertile land. Continuing the expansion of schools to remote areas, power supply and potable water supply are some of the envisaged programs.