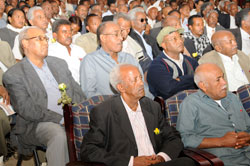 The symposium of the Southern region administration that had been underway since yesterday under the theme “Eritrea: 20 Years of Dignity”, concluded today.

Mendefera, 17 April 2011- The symposium of the Southern region administration that had been underway since yesterday under the theme “Eritrea: 20 Years of Dignity”, concluded today.

During the two-day symposium, a number of study papers focusing on the all-round development of the region over the 20 years of independence were presented.

In a statement he made at the conclusion of the symposium, the Administrator of the region, Mr. Mustafa Nurhussien expressed appreciation to all those who presented papers and pointed out that endeavors will be directed in the coming five years towards enabling the gathering of harvest three times a year so as to achieve food security.

In a study paper entitled, “Effective Social Services For All- Everywhere”, agricultural branch head in the region, Mr. Bahta Tedros said that modern farming methods that would enable yielding of bumper harvest from limited areas of land have been introduced with satisfactory initial results.

Indicating that commendable achievements have been made in developing the agricultural sector and boosting production, Mr. Bahta underlined that effective work has been accomplished in soil and water conservation as a result of the collaborative efforts of the people, government and partners.  Parallel to crop production, satisfactory achievements have been registered in the cultivation of fruits and vegetables as well as securing animal resources, he added.

Furthermore, Mr. Bahta disclosed that increasing reserve areas to 15,000 hectares, upgrading the usage of smokeless ovens from 28 to 50%, increasing production per one hectare of land and raising the cultivation of fruits and vegetables from 10,000 hectares to 16,000, include some of the future programs of the regional agricultural branch.

The head of engineering services and administration of projects in the region, Mr. Khaled Saleh on his part pointed out that various large scale projects have been implemented in the region in different stages, most of them focusing on education. About 1,603 educational infrastructure projects were implemented at a cost of 2.8 billion Nakfa, he added.

As regards the progress in the education sector, the head of Education Ministry branch in the region, Mr. Kaleab Tesfaselisdie said that schools in the region have increased by 306% and student enrollment by 455%, while 73% of the region’s population has been able to read and write.

The head of the Health Ministry branch in the region, Dr. Tesfalem Gebrekidan on his part stated that as a result of the efforts exerted to provide efficient health services, the number of health centers has increased by 229%.

Finally, the participants of the symposium forwarded several recommendations that include strengthening of technical training centers, proper utilization of provided educational services, providing encouragement to community health technicians and the development of the required infrastructure for expanding telephone services.

Moreover, as part of the symposium, an exhibition was presented that portrayed the 20 years of the region’s development journey in which, 14 production companies as well as branch offices of ministries and associations displayed their activities.