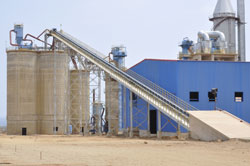 He pointed out that the factory is located at a site where the necessary raw materials are available. It has also easy access to power supply, in addition to land and sea transport services. The factory has already finalized the overall construction process and is making preparations to supply its products, Mr. Habtemariam added.

He further indicated that the factory is equipped with modern facilities, and that it has the capacity of producing 10,000 quintals of cement daily. Such products would be exported beyond meeting domestic demand.

Noting that it applies environmental-friendly technology, Mr. Habtemariam explained that the factory produces three types of cement namely, ordinary portland cement, sulphure-resistant cement and the polozaic one. In this connection, he said that the factory would concentrate more on the production of portland cement which used to be domestically produced and acquired export popularity as far as the Middle East.

Playing with Fire under the Rubric of NGOs