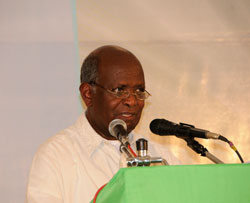 Land, water and generally environment are very closely related to one another.  A failure in properly protecting one of them negatively affects the conditions of the others.  Showing concerns about them is in fact respecting the close relations between populations and the natural resources. Judicious and sustainable utilization of such basic necessities, protecting these natural resources from damages and enhancing their tidiness is showing respect to ones wellbeing.  Integrated engagement of the people and fostering cooperation partnership among varied ministries is indeed the sole solution to keeping nature intact and making a better use of it through environmental priorities. The Ministry of Land, Water and Environment conducted a symposium that discussed about land, water, and environmental issues from 11-13 of April 2011 at NUEW’s hall in Barentu.

Any sort of economic development should not be achieved on the cost of damaging the natural resources. It is to be noted that land tenure systems prior to independence were not taken into account fair use and allotment of land.  “Why a new tenure System”, – a topic set for discussion in the symposium highlighted the significance of issuing a land law that addresses timely issues. To rectify shortcomings of prior laws, a new legal notice was promulgated in 1994 with a view to ensuring equal allocation of land and proper utilization of land resources throughout the nation. The department of land has been working in effecting proper utilization of land in a way that corresponds with the urbanization and economic progress of the country.  The department has been also working on usufructuary rights such as land leases for investment, construction of residential houses, agro-industrial activities and other major undertakings.  Ensuring weather the land resources have been judiciously utilized as the proclamation requires has been the main tasks of the land department.

Major tasks have been accomplished in land use planning. Researches has been conducted to assess the conditions of land resources and thereby to manage such a resource to the point of keeping its natural state intact and securing its sustainability. In preventing land resources from degradation, land classifications based on the purpose of the undertakings becomes a priority. The role of Cartography and information systems has been highly significant in Land use planning and area development activities. The land use planning and cartography units used to prepare manually made maps through the assistance of rather old navigation GPS in the period between 1995 and 2000. From 2000-2005 the cartography and land use planning units merged and started conducting  planning activities through the use of advanced GIS and GPS equipment which played significant role in the precision of data and accuracy of maps. The land use planning and cartography units of the department of land has been making due contribution in the preparation of maps that illustrate land use categories.  Likewise, the unit has been working in the preparation of cadastral maps, maps of designated areas for communication towers, maps of agro-ecological zones, and developmental plan maps throughout the country.

In 1994 land allotment activities were carried out by the then commission of land.   Since the set up of the ministry of land, water and environment in 1997, however, the department of land has been working in such activities in an enhanced manner.  Restructuring traditional practices of land use was its main tasks. With a view that land allotment requires extensive researching activities before practical implementation on the ground, land allotment has been categorized in accordance to the out lined plans. Ministry of Land, water and environment symposium also discussed on the procedures of land allotments. The main objective of land use proclamation has been focusing on effective and proper utilization of land. As such farmlands need to be identified for their productivity and their impacts on the biodiversity need to be considered. Concerns about clearing a number of trees for agricultural purposes and for burring lime was discussed in the symposiums of the Ministry of Agriculture, Gash-Barka Administration as well as in the symposium of the Ministry of Land, Water and Environment.

Since land allotment proclamation has been effective for about 17 years, the participants of the symposium expressed concerns about making amendments in the regulations, issuing a new land management system that gives utmost focus on protecting natural resources, practical implementation of the regulation of agricultural undertakings at distance of 700 meters from riverbanks. In his explanation on the raised questions, the Minster of Land, Water and Environment, Tesfay Gebreslasie said that there would be continuous amendments in the regulations and there would be limitations on the land-size that would be allotted for investment based on the extent of the investment undertakings and the ecological conditions of the area designated for investment.

There was remarkable scarcity of water during the early day of independence. Most sources of water supply were from underground waters. Limited distribution of water, particularly in rural areas  not only forced a number of people to fetch water from distant areas, but also poor hygiene quality of the water sources exposed them to water borne diseases.  The major challenge of the water resource department was hence increasing distribution of water. In the first seven years of independence that is from 1991-1997, 135 dams were constructed, 445 wells were dug, and the coverage of water distribution rose from less than 7% to 10%.  In the period from 1998to 2001the water supply unit was engaged in supplying water to people displaced due to TPLF’s vicious aggression. In the later developments from late 2001-2010, highly motorized water supply system was introduced and that in turn changes people’s life style tremendously. With the compilation of potable water supply projects in 1376 villages, at this time 74% of Eritrea’s population is getting access to potable water supply, water borne diseases are now substantially diminished.

Different units of the department of water resources have been implementing the set out policies and strategies that focused on implementing integrated water resources management, conducting survey of water sources and information gathering activities, preventing water sources from contamination and other activities of judicious unitization of water. In line with the set out goals, the survey and information unit in the department has been conducting varied surveying activities on water resources in general and underground water resources in particular. Based on the Government’s macro-policy the unit has been involved in surveying surface and underground water resources that could be utilized for irrigation and different undertakings. Aerial, hydrological, and underground surveys that have been conducted throughout the country have been imperative in the development of a comprehensive management of surface and underground water resources and in providing metrological forecast. This unit also conducts geo-hydrological and geophysical surveys for the construction of water reservoirs. Likewise, it conducts surveys on pumping capacities of the drilled wells and it provides information about quality standards and quantity of potable water supply to customers. The unit for the management of water resources also works in effecting proper managerial procedures such as conducting experiments on chemical content concentrations, physical properties and bacteriological contaminations.

Devastation of biodiversity, pollution of air and contamination of water resources among other topics were major concerns of environmental conservation. Utilization of renewable energy, effective management of chemicals, prevention of indigenous vegetation and animals in their natural genetic makeup were also stated as remedial solutions. The symposium of the Ministry of Land, Water and Environment was concluded reaching common understanding as regards conservation, judicious utilization and prevention of natural resources from pollutions.

Inhabitants Of Mai-Mine Express Satisfaction With Provision Of Social Services