Celebrations of the Nara and Kunama Ethnic Groups (Part II) 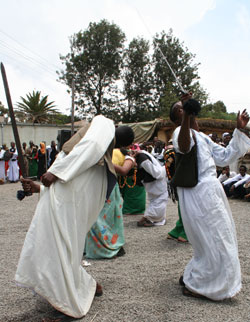 Mashekele is one of the holidays colorfully celebrated by the Nara and Kunama ethnic groups.

Mashekele is a celebration highlighting the beginning of the harvest season. Every member of the society eagerly awaits the commencement of the celebrations: and it begins by a sign from a village elder elected to coordinate the celebration. The elder will light his torch and begin to sing, after that every member of the society will light his torch and follow the elder man signing after him, until they reach to the place of their gathering, somewhere outside the village. Once they reached there, they will gather their torches together on the ground and sing and dance until the torches went out.

Once Mashekele is celebrated, members of the society start to harvest their crops and collect honey. The products of the first day will be gathered in the evening and prepared in to different dishes where the honey is brewed and made into a local drink, also called Mashkele.  Once the products of the first day are prepared, it will be put in to small pots and be given to the deceased at the local graveyard.  No one is allowed to eat from the new products before the present are endowed.

The person presenting the gifts narrates the encounters of his/her life to  dead relative or friend that he/she is giving the presents to , later he/she will eat from the food and drinks left from the present. After wishing the dead to rest in peace the person return to his/her village.In the Nara ethnic group such a ritual is not used to be related to Mashekele. They used to perform the ritual of presenting gifts to the dead after they harvest.

Previously the day where the villagers take food and drink to the dead ancestors was the day after the Mashkele celebration known as Shanta in the Kunama and A’awa in the Nara. Those two celebrations were also held in a place that is believed to be a holy place where cutting trees and the herding of animals were strictly forbidden.  Members of the society also swear by this holy place called Tarbo. There were two types of Tarbo, one is a temporary holy place reserved for the summer season only, and the other is a permanent holy place reserved throughout a year.

This place is also believed to be the residence of their god, Ana. Any one violating this place is severely punished, usually the punishment or the fine are implemented on the celebration held for marking of this place.
During this occasion the council of elders slaughter the livestock brought as punishment and spill the blood of the animals they slaughter there, or spill the local drink they brew.

In the Nara ethnic group, the A’awa celebration is marks the coming of the Logo Nama and other elders to the place known as Adaga, a mountainous place. Here, usually seven holes are dug to present the number of the Logo Nama in the society, but it also might vary depending on the number of Logo Namas, lords of the land.

Those kinds of celebrations has been celebrated among the society starting from the beginning of time and are the cultural identification of those societies and need to be preserved and respected.