Interview with Minister of Public works 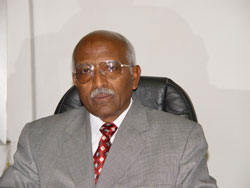 Various road networks, dams, bridges, public buildings and other infrastructure facilities have been constructed in the past 20 years. This demonstrates the commitment of the Government especially the Ministry of Public Works to reconstruct the country’s war-ravaged facilities. So far, the construction process has added vital impetus to the all-round development drive and brought tangible results in the living standard of the public. In line with the underway symposiums, the Ministry of Public Works is going to hold its symposium from April 25 to 27 to evaluate its past achievements and shortcomings as well as highlight future programs. Minister Abreha Asfeha has conducted an interview with ERI-TV in connection with forth coming symposium. Excerpts follow:

Let’s begin with the vision of the Ministry?

The main objectives of the Ministry of Public Works are to organize, coordinate and accelerate construction projects in the country thus, to provide reliable, efficient and swift services. Its major activities are focused on developing infrastructural facilities, drafting urban and semi-urban master plans and developing residential as well as office areas, among others. The Ministry also plays a significant role in encouraging private construction ventures and supervising the construction process to ensure accepted construction standards are enforced.

What has the Ministry accomplished in this regard in the past 20 years?
Prolonged wars has reduced infrastructures in rubbles. Just 20 years back, there were no noticeable infrastructure systems. On top of this all, the materials needed for construction at that time were being imported.

In view of this fact, the Ministry geared up to draft master plans, launch building materials factories and organize skill-upgrading training courses. Such endeavors have played a paramount role in reviving the construction process in the country.

The Ministry commenced its work through the renovation of major roads systems namely the Asmara-Massawa, Asmara-Mendefera and Asmara-Keren routes in 1991-93 utilizing internal capacity. Ever since, the construction process has continued in an enhanced manner and as a result major construction projects including the construction of strategic roads, bridges, international airports and water reservoirs has been implemented.

Can you say that the projects drafted were implemented effectively?

The envisaged projects have been implemented successfully according to the set plan, that it, had it not been for the war of 1998, major strides in this regard could have been registered. However, at that time, it was found at that time that it was important to review the priorities and the projects on industrial and trade activities and main emphasis was given to the success of ensuring food security.

What is the future work program of the Ministry?

We have laid the necessary platforms and focus would be given towards reinforcing mass construction of houses parallel to the set objectives of developing infrastructure. The program will also be further intensified to create conducive ground for mining, investment, expansion of small ports and the construction of residential areas, besides office premises.

If Intimidating the Eritrean People was Unfeasible Yesterday, So is of No Avail Today