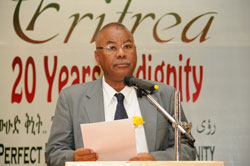 As part of the on-going series of symposiums to celebrate the 20th Anniversary of Eritrean Independence, the Southern Administration Region symposium was held in Mendefera town. The symposium conducted from April 16 to 17 highlighted the endeavors carried out in the past 20 years and the challenged overcome as well as the outlined future work program.

In the course of the symposium, a short documentary film depicting the people’s hardship during colonial period and their steadfastness, as well as the ongoing development endeavors after independence was also screened.

In an opening speech the Administrator of the region, Mr. Mustafa Nurhusein, outlined the up-to-date implementations, development programs and the achievements registered in the past 20 years.

He pointed out that about 2.7 billion Nakfa has been allocated in the development infrastructures facilities and 2.2 billion Nakfa to upgrade traditional method of agriculture into modern. He added that the implementation of such programs has brought tangible change in the people’s living standard.

In the afternoon, Mr. Tedros Tekle, director of the Regional Administrator’s office, presented a paper focusing on the administration and political activities that have been accomplished in the post independence period.

In his presentation, he gave briefings on the social demographic and political consciousness of the region, besides the ongoing endeavors to ensure social justice. He further went on to explain that after the formation of the Southern Administrative region in 1996, human power capacity has increased by 153% and effective work have been undertaken in the regard of land reallocation, litigation  of village-level disputes, resettling citizens who used to live in upland places.

Mr. Tedros also indicated that about a total of 300,000 war-displaced nationals were rehabilitated through projects of reconstructing houses, extending social services, distributing agricultural equipments and so forth.

On his part, Mr. Bahta Tedros, head of the branch office of the Ministry of Agriculture in the Southern region, discussed the efforts carried out to introduce modern farming methods and the significance of those efforts in achieving food security. Speaking on agro-ecology, he pointed out that the region is endowed with large potential agricultural areas coupled with suitable temperature for livestock breeding and bee farming.

According to Mr. Bahta, preliminary land use classification survey was conducted in 1998 for the first time by agricultural experts in a bid to utilize land use properly and was under implementation until 2008.

“Agriculture is a backbone for advancement of economic progress especially in this region. For this reason, agriculture has been given a top priority to overcome poverty through raising the production of grain, fruits and vegetables, milk, meat, eggs, honey and the like,” he said.

Concerning activities related to reforestation activities; terraces, embankments and water diversion schemes among others were constructed. Campaigns for reforestation programs were carried out in various schools, hospitals and other places. Moreover, 40,000 smokeless ovens were distributed and skill-upgrading training courses were offered. As a result, soil erosion and forest degrading have shown a marked decrease in the region and the population of wildlife and natural vegetation are showing growth.

The second day, a paper on the development of infrastructural facilities was presented by Engineer Khalid Saleh, head of Engineering Services and Project Administration in the region.  He indicated that 108 health facilities at a cost of 244 million Nakfa, 372 educational projects worth Nakfa, 769 million as well as a total of 179 road projects were implemented in the past 20 years. These above mentioned projects have in turn enabled inhabitants to access social services in their locality.

Meanwhile, Mr. Khalid noted that the construction of 395 water projects has enabled 73% of the local inhabitants to obtain potable water supply and 269 other construction projects comprising residential houses, various offices, banks, youth center and public hall were carried out. According to the head of Engineering Services, at the moment, 75% of the total population of the region has got access to telephone services.

Following this, study paper on educational activities was presented by Mr. Kaleab Tesfasilase, head of the Ministry of Education branch office in the region. He explained that the historical background and how “education for all” policy was effectively implemented. At the early days of independence, only 101 schools were providing services in towns of the region.  Noting that some of the major challenges of that time were socioeconomic problems, remoteness of schools, underage marriage and existence of various diseases were the main challenges to the educational process, the Government of Eritrea’s efforts has been paying up.  Currently there exist 410 schools in the region, and student enrollment has risen by a staggering 455% and 73% of the inhabitants have been able to eradicate illiteracy.

Regarding health provision, Dr. Tesfalem Gebrekidan, presented a paper on the implementation of the vision of health sector to provide equitable and quality service as well as enhancing public awareness. At present 89 health institutions including referral hospital, health stations and health centers are functioning in the region. Along with this, mobile health service in 110 villages is conducted monthly. He said that mother and child death rate, communicable diseases have declined, and people’s awareness is enhancing.

Papers presented at Symposium of Trade and Industry Ministry

Celebrations of the Nara and Kunama Ethnic Groups (Part II)