Minister outlines accomplishments in the sector of public works 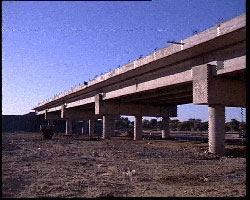 In an interview he conducted in connection with the Ministry’s Symposium due to be held from April 25 to 27 here in the capital, Mr. Abraha noted that major programs focusing on ensuring efficient and advanced construction industry, organizing and speeding up construction activities, as well as the development of infrastructure facilities and residential housing have been implemented.

The Minister further explained that the task of infrastructure development has been given top priority, and as such substantial investment has been made as regards construction of major roads and bridges in different parts of the country.

Noting that the drafting of efficient, speedy and safe construction projects is among the main objectives of the Ministry, he outlined the vigorous endeavors made to alleviate shortage of residential houses.

Moreover, Mr. Abraha stated that in the wake of the launching of the Warsay-Yikaalo Development Campaign, a number of water reservoirs and roads have been constructed in a short period that laid solid ground for achieving food security. In this respect, he explained that various construction projects that were suspended due to the TPLF regime’s war of aggression have been reactivated.

The Minister indicated that there are plans to construct many housing residential complexes and expand infrastructure facilities, ports and bays.