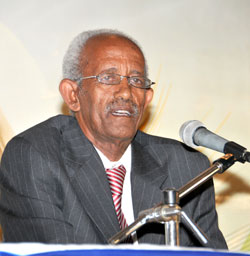 The significant role trade and industry play in creating a sustainable economic growth has never been overlooked. Eritrea’s development in such industrialization and trading activities in one of Africa’s first. The trade and industry sector of the country begun to revive once again after independence with the then 42 government and 644 private owned industrial plants which embraced more than 10,000 employees. The ministry of Trade and Industry conducted a symposium that evaluated a two-decade journey in industrial and trading development.

The significant role trade and industry play in creating a sustainable economic growth has never been overlooked. Eritrea’s development in such industrialization and trading activities in one of Africa’s first. The trade and industry sector of the country begun to revive once again after independence with the then 42 government and 644 private owned industrial plants which embraced more than 10,000 employees. The ministry of Trade and Industry conducted a symposium that evaluated a two-decade journey in industrial and trading development.
One of the major undertakings of the government in the revitalization phase of trade and industry was securing the provision of ingredients and spare parts to the industrial plants that were at critical stage. Such decisive inputs of the government to the struggling industrial plants have not only revitalized the industrial sector but also make due contribution in productions progress.
“The year 1993 was a time in which the industrial sector showed a great leap through the introduction of new machineries, spare parts and other industrial equipment,” says Mr. Tadese Weldeyohaness, director general of the department of industrial development. Through such inputs most of the government and private owned industrial plants begun to flourish and therefore the manufacturing capacity grows to 80% of the overall production rate. Such advances called for the rise in the employment opportunities, prices stabilization, and more importantly played highest role in the enhancement of products quality.
Privatization of most government owned factories in 1996 was also a major development in the trade and industry sector. In the first 3 to 4 years of independence thirty four of the government owned factories were privatized. In 1994 national micro-policy and investment proclamation encouraged investment through nominal taxation system. Following which trade license permit regulation which became functional in 1995 created conducive ground for investment. With in the period between 1993 and 1996 trainings in business management, marketing, and tannery technology were offered to about 306 individuals.
The establishment of standardization institution, professionals associations, development of the chamber of commerce and consultancy activities, and above all the establishment of industrial zones of Merhano, Adi-guadad, and Adi-abeyto within the period from 1993 to 1996 was indeed a turning point in the development of trade and industrialization.
Through a steady progress in the industry sector, a number of new factors were also constructed in the post independence period. EriSoc – a factory that manufactures gas cylinders and ovens, BANATOM which processes and packs banana and tomato paste and other factories such as marble and granite, flour and pasta, and spare parts factories among others were established. Likewise, factories of cement, iron, foam and other factories of building materials have been constructed. Besides, preparations have been finalized to establish Sugar and iron melting factories. Moreover, foreign and domestic investments carried out in the textile and garments factories have been played significant role in exporting locally made products.
Indicating that limited industrial knowledge on the part of the industrial community, lack of intensive quality control activities, and limited infrastructure in some parts of the country have been a challenge, Mr. Tadese pointed out that enhancement in manufacturing capacity, production improvement in the locally available industrial ingredients and food items, and the introduction of an enhanced environmental protection have been out lined to be carried out in the next five years.
Handcraft activities are widely practiced in Eritrea. A number of artistic products that could be utilized as utensils and for aesthetics as well indicate the socio-economic activities of the nation’s nine ethnic groups. Embellished garments and jewelers have been reflecting incredible talents of the people. The department of handcraft development has been acting in nurturing professional skills through offering advance trainings in ceramics and weaving to a number of people. So far, around 600 women have been trained in weaving. According to Mr. Kidane, director general of handcraft development, bearing in mind the importance of such activities in changing peoples life style through earning incomes, the department of handcraft development is planning to organizing craftspeople as per their areas of vocation.

Foreign trade development has been centered in fostering regional economic integration and thereby looking for global economic integration. In this view point, regional economic integration agreements were signed. Hence, Eritrea become member of regional organizations such as COMESA, SEN-SAD and ACP-EU – a trade agreement reached among Afro-Caribbean and European countries in Lome, Togo.
Modern Foreign trade activities pioneered in Eritrea during the Italian colonial era. At that time it reached its highest stage of development through exporting mines and agricultural products. Such products were exported to Egypt, Ethiopia, South Africa, Saudi Arabia, United Arab Emirates, Yemen, Jordan, Iraq, Iran, Syria, Israel, and to Europe as well as to India. Eritrea’ highest accomplishments were degenerated during the Ethiopian colonial era. Thus, the leading task in the post independence period was reawaking of the export activities form ground zero. Import and export permit once was dominated by a few agencies, has been given to a number of Eritreans throughout the country. Director of African desk in foreign trade at the ministry of trade and industry, Mr. Zefework Fishehaye, stated that Eritrea’s foreign trade policy fosters bilateral, regional and global economic integration by encouraging export aimed investment where active engagement of business community plays a major role, and attracting domestic as well as foreign investment.
The symposium also highlighted about bilateral trade agreement reached with different countries such as Italy, Djibouti, Algeria, Uganda, Kenya, Burundi, Libya, Sudan, Egypt, Tanzania, Qatar, Syria, and Turkey. As such export rate of prepared food stuffs, beverages, textiles and textile articles, base metals, live animals and animal products, raw hides and fur-skins, among others have been substantially increasing. As part of fostering bilateral economic integration Eritrea participated in bout 25 international trade exhibitions held in Mozambique, Kenya, china, Zimbabwe and other countries.
Since there was limited trade permits in the early years of independence there was hardly any domestic trade activity. There was also controlled trade activity. Since 1991 however, good atmosphere has been created so as to encourage the private sector. Through such initiatives a number of permits have been directed to the private sector. Many of trade permits have been, however, given to individual investors rather than share companies for domestic investors have not been in the habit of conducting joint ventures. Mr. Mogos Weldemichael Director General of domestic trade development pointed out that the domestic business community needs to make intensive researches and conduct risk analysis before partaking in any ambitious business venture as well as to cultivate the habit of conducting joint business activates. He also expressed concerns on the speculation of goods that has been frequently seen by some traders. Participants of the symposium also commented that trade permits have been largely confined on general trading activities which encourages consumption rather than production. With this regard Mr. Mogos said that short and long term plans out lined would focus on boosting production so as to promote production based investment.

The symposium also discussed about activities of the chamber of commerce, standards institution, and activities of free trade zone. Eritrea chamber of commerce which was established in 1947 was in a revitalization phase in the first three years of independence. It has been playing a catalyst role in the government’s policy of private sector led economic system said chairperson of the association Mr. Akborom Tedla. “The chamber has been creating conducive ground for trade and investment in collaboration with the government,” Mr. Mogos added.

Eritrea’s Standards institution (ESI) that was established in 1995 is the only institution with the rights of certifying quality of products that would be imported or exported so as to guarantee the benefits of customers. ESI has been utilizing holistic approach of standardization which is conducted with the consensus of varied sectors.  According to Mr. Beyene Misgna director of ESI the institution which has been focusing on production quality certification, is looking forward to give system certifications- which focuses on good management. At present the ESI has engineering, chemical and Biological laboratories. The institution is also planning to establish a new national standards center, to train specialists in varied areas of specializers so as to give satisfactory services.

A number of foreign investors have been showing interests to install industrial plants’ in Eritrea’s free trade zones. Since the official announcement of the free trade zone in 2001, extensive infrastructural activities have been put in place. Massawa and Assab ports and air ports and other inlands have been decided to be part of the free zones. Since, current port of Massawa would not be sufficient in hosting freed zone trade activities, Dr. Araya Tsegay, head of Free zones authority said that a new regional port that would accommodate vast trading activities would constructed in Massawa. Pointing out the advantages the foreign investors and the host country would gain Dr. Araya said Eritrea is creating good investment grounds to attract as many investors. A three-day symposium of the ministry of trade and industry was concluded by issuing varied programs to be implemented in all sub-sectors of the ministry.