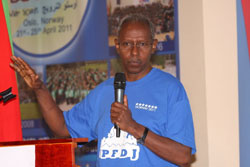 The 7th YPFDJ Conference was conducted from April 22 to 25 in Oslo, Norway.

In a message conveyed to the participants via video, President Isaias Afwerki noted the active participation of the youth in national development endeavors over the past 20 years which he lauded.

In his message, the President called on the youth to further enhance their participation in nation-building endeavors, as well as following up the current symposiums that are being

conducted inside the country on the part of ministries and other government institutions as points of reference.

Likewise, Mr Yemane Gebreab, head of Political Affairs at the PFDJ, commended the active participation of the Eritrean youth in development endeavors in the Homeland through inheriting the cherished values of past generations. He also called on them to reinforce their involvement in national affairs.

According to reports, over 40 papers were presented on the occasion.