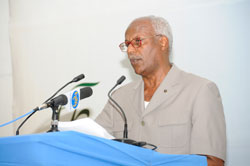 The symposiums of the Ministry of Marine Resources and the Administration of the Southern Red Sea region opened today under the theme: “Eritrea: 20 Years of Dignity.”

Assab, 28 April 2011 – The symposiums of the Ministry of Marine Resources and the Administration of the Southern Red Sea region opened today under the theme: “Eritrea: 20 Years of Dignity.”

Speaking at the opening ceremony of both symposiums, the Minister of Marine Resources, Mr. Tewolde Kelati, indicated that substantial investment was made with especial emphasis on the remote areas which attests to the commitment of the Government to ensure development.

Outlining the accomplishments in the sector over the past 20 years, the Minister noted the long-term vision aimed at bringing about tangible development in the marine resources sector.

Also speaking on the occasion,  the representative of the regional Administration, Mr. Kibrom Nirayo, pointed out that various challenges were encountered to bring about commendable socio-economic changes. In this connection, he explained that prior to independence, there existed no social service in the region. However, following strenuous endeavors in the post-independence period, a number of social services and other basic requirements have been expanded.

Mr. Kibrom further explained that the failure of scattered villages to be regrouped has negatively affected the task of expanding social services in some areas, especially education and potable water supply. In this regard, he pointed out that about 3 billion Nakfa was disbursed in the  years following independence towards the development of infrastructure facilities in the region.

Meanwhile, an exhibition portraying the accomplishments of the Ministry of Marine Resources and the Southern Red Sea regional Administration over the past 20 years has been staged.

The symposium of the Southern Red Sea region would continue from April 28 to 29, while that of the Marine Resources Ministry would take place from April 30 to May 1.

Encouraging activities undertaken to upgrade the skill of traditional fishermen