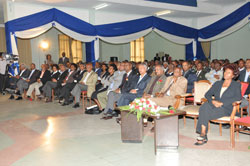 The existing fascinating art deco in Asmara, Byzantine and Turkish buildings in Massawa, ancient roads and traces of railways prove that modern construction industry was introduced long time ago in Eritrea. Urban master plan was drafted in 1895 for the first time and Eritrean rural areas began to morph into urban and semi-urban centers. However, its advancement was crippled due to prolonged wars.

After independence, the Government of Eritrea inherited severely damaged infrastructure facilities, buildings and industrial plants in shambles that required immediate attention. Without these constructions, no economic transaction and social interactions could have developed.Hence, the Ministry of Public Works set up to take prime responsibility to stimulate construction industry intended to erection and repair of immobile facilities. In connection with those undertakings, the Ministry has conducted a successful symposium in Asmara from April 25-27 to review its past endeavors.  In the course of the symposium, 14 study papers were presented highlighting the implementation of engineering projects carried out in the past 20 years. It also discussed in detail the achievements, shortcoming as well as its forthcoming programs of the Ministry.

In a study paper presented, lack of skilled manpower was mentioned among the main hurdles of the Ministry had to cross. To this end, substantial investment was made to nurture professional and competent workforce in a bid to maximize the quality and productivity. Technical and vocational schools were expanded by the Ministry of Education and as a consequence number of engineers, technicians and semi-skilled workers rose significantly. Most of the major infrastructure and buildings projects were execute by skills and ingenuity of locally trained human resources.  It was also disclosed the need to produce architects and town planners so as to realize strategic urban development and engineering programs.

According to the presentation on the Department of Urban Development, master plan was drafted on land use, road networks, infrastructure, implementation, water supply and sanitation, electricity and telephone. This was aimed at modernizing urban centers in free-pollution environment and ensures equitable expansion of socio-economic significant infrastructure system. In relation to this, a paper on water supply and sewerage in buildings were discussed in detail. It was stressed the importance of proper design and quality management for professional service in terms of safety, cost, quality, durability and aesthetics of structure to be constructed.

The Urban Development had been preparing its plan, evaluating and ratifying manually from 1991 – 1996, however, it had introduced digital form of Geographic Information System.  In the second day of the symposium, the activity of the infrastructure development department over the past 20 years was assessed. It was highlighted that the main task of the department comprises of developing land and hydro infrastructure, besides managing projects. At the beginning, the department was engaged in renovation and reconstructing old roads and later on, its activities were expanded on building new asphalt, gravel and earth roads. As a result of the undertaken projects, villages, towns and cities are interconnected through road networks today. These infrastructure facilities are making due contribution in the living standard of the people in saving unnecessary wastage of time and energy.

Besides, the department was engaged in building and expanding bridges, airport, ports, water diversion channels, dams and irrigation and housing infrastructure.  A total of 7,940 billion Nakfa has been invested to implement such projects excluding the budge allocated by regional administrations. Moreover, various national studies focusing on road, bridges, airport, and water supply were conducted. It was also indicated that some of the major future work plan of the department includes reinforcing construction of roads, expanding airport and building infrastructures in mining sites. On top of this, building dams and other water division schemes to impound water would be stepped up towards speeding up the underway endeavors to achieve food security.

Following this, the historical development of construction companies and engineering projects over the last 20 years was discussed. It was stated that roads, trenches, building and other construction process was undertaken through community-based campaigns during the armed struggle. In the post-independence period, a number of construction companies including Bidho, Mereb, Gedem, Musa Ali, Sawa and Homib were formed.  Some of them were merged to upgrade their capacity and modern machineries were introduced in these companies to effectively carry out engineering projects. Also, a study paper addressing the current available heavy duty earth moving equipment in construction industries were presented. It was the need to enhancing proper deployment management in construction projects.

Moreover, a paper on seismic hazard and its assessment in Eritrea was presented. It was highlighted the importance of introducing safe building designing in earthquake-prone areas so as to reduce casualties.
The restoration of construction industry has become a driving force for speeding up all-round development activities in the country. Various building projects have and are being implemented in different sectors in all regions through Government’s huge expenditure. These projects are equitable distributed across the country to bridge the gap between urban and rural areas and thereby to ensure social justice. The construction of health projects worth over 1, 133 billion Nakfa, education facilities at expenditure of more than 1,187 billion Nakfa, social rehabilitation projects, residential houses and factories could be cited as an example of the on-going endeavors.

At the closing of the symposium the Minister of the sector, Mr. Abraha Asfaha lauded the papers presented and adopted recommendation in realizing the envisaged plan of the sector effectively.

The End of the Civil War (Part II)