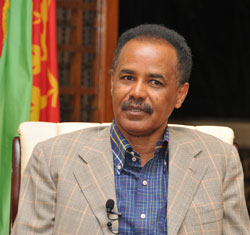 President Isaias Afwerki said that solid foundation is being laid towards ensuring equitable development for the benefit of generations.

Asmara, 29 April 2011 – President Isaias Afwerki said that solid foundation is being laid towards ensuring equitable development for the benefit of generations.

The President made the salient remarks in the interview he gave to national media outlets tonight which was also transmitted live via alenalki, eastafro and hornofafrica websites. This was the first part of the interview focusing on the Eritrean national integrated development strategy and plan, political, security and diplomatic issues, as well as regional and international developments, especially the prevailing situation in North Africa and the Middle East and future prospects.

Noting that the pace of economic development rests on the strength of the foundation, he noted that current predictions regarding Eritrean economic growth is not something accidental. In this respect, President Isaias pointed out that what makes the growth of the Eritrean economy real is the fact that it is being achieved free from external support and dependency.

He further explained that concerted action is being taken to see to it that national resources serve the entire society on an equitable basis.  The President indicated that there exist development zones in the country, namely the Eastern Escarpment, the Highlands and the Western Lowlands. He underlined that the achievement of food security is the pillar of realizing other development goals. In this regard, President Isaias said that Eritrea is making reliable progress through rebuffing various obstacles and conspiracies. As regards ensuring social justice, he stressed that social services should be accessible to all nationals across the nation, including the remote areas.

In briefings he gave regarding the sanctions resolution against Eritrea adopted in the name of the Security Council, President Isaias underlined that it was an act of conspiracy that has neither legal basis nor political justification. As such, the move was essentially aimed at sabotaging the final and binding ruling of the Eritrea-Ethiopia Boundary Commission which has reached legal conclusion, although not yet implemented on the ground, he elaborated.

President Isaias further underscored that the ploy is also designed to expose the Horn of Africa region to instability. However, the Eritrean people not only dealt integrated rebuff to such conspiracy but are also standing on better and firm ground, he added.