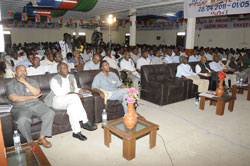 In a paper he presented, the director general of administration and finance in the region, Mr. Kibrom Nirayo, indicated that the region is endowed with ancient remains attesting to the origin of humankind, and that the relics being preserved in Rahaita that portray the history and culture of the Afar ethnic group is among the precious assets of the region. The Southern Red Sea region is also rich in minerals like potash, iodine and raw materials for the production of cement, among others.

The director general of infrastructure development department, Mr. Andemichael Solomon, indicated on his part that more than 227 projects were implemented in the region at an expenditure of over 1.6 billion Nakfa over the past 20 years.

Noting that 70% of the population in the region has became beneficiary of potable water supply, he explained that master plans of semi-urban centers have been prepared and postal, as well as mobile phone services introduced. The construction of the Massawa-Assab road, Assab-Rahaita route, Garsa-Assab and the road running from Assab to the Ethiopian border, as well as over 1,000 feeder roads is also among the major accomplishments in the region.

Mr. Andemichael further stated that Assab Port has now the capacity of accommodating over 3,700 ships and 143,000 containers as its capacity has been upgraded following the renovation of ship docking facility, installation of water pipelines and construction of container storage facility.

Outlining efforts exerted to boost the production of fruits and vegetables that made due contribution in stabilizing the local market, he indicated that activities are underway to promote such practices in Afambo, Egroli, Gibdon, Mekaekae. There also exists reserve land  on 3,100 hectares in Sireru, Afambo and Ayumen.

Meanwhile, an exhibition is being staged displaying the accomplishments of the Southern regional Administration and the Ministry of Marine Resources.