Traditional Wedding Ceremonies of the Hedareb (Part I) 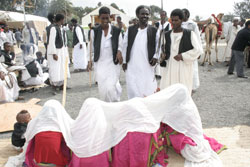 Marriage is the social institution under which a man and woman establish their will to live together as husband and wife by a legal commitment. The ceremony in which such a union takes place is called wedding. And wherever you go, wedding ceremonies tend to vary according to the culture and belief of the society in which it takes place.

In a direct contrast to other wedding ceremonies in our society, in the Hedareb the actual wedding day is not decided during betrothal. Wedding days are decided once the necessary requirements like the age of the couple, the presents that are to be given to the bride and the economic conditions for holding the ceremony are filled. And betrothals are commenced at the request of the groom’s family. They are the ones who are also responsible for setting the date in which the wedding ceremony is going to take place.

Once the ceremony starts, the groom will take a bracelet, called “teket”, from his mother’s hand and put it on his and he also puts a necklace made of beads, called “somit”, and shave his hair while the bride to be washes her hair, the bride braids her hair once she is married and reaches in the house of her in-laws.

On the eve of the wedding the groom with his friends and few elders accompanied by three ladies will go to the bride’s house. On the way to the bride’s house they will sing, dance and his friends and relatives will held a camel race. Once they reached at the house of the bride, they will get great hospitality from the family of the bride and the groom rest on the bed prepared only for him. On this day the two sheep or goats that were brought by the groom’s family are slaughtered and the festivities commences. After that both families will eat the food prepared and drink coffee. The youth invited for the wedding will play a traditional game known as “Biboch” on the wedding reception.

The End of the Civil War (Part II)