Struggle towards ensuring regional integration and cooperation should to be reinforced: President Isaias 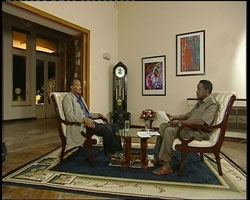 President Isaias Afwerki underlined that the struggle towards ensuring regional integration and cooperation should to be reinforced through drawing lesson from the impediments encountered over the past 20 years. The President made the statement in the second part of the interview he gave to local media outlets.

Asmara, 30 April 2011 – President Isaias Afwerki underlined that the struggle towards ensuring regional integration and cooperation should to be reinforced through drawing lesson from the impediments encountered over the past 20 years. The President made the statement in the second part of the interview he gave to local media outlets.

In the extensive interview focusing on the current regional situation and developments in the Horn of Africa, the Red Sea, Gulf of Aden, North Africa and the Middle East within the context of broad spectrum and mindset, President Isaias recalled the promising prospects that unfolded in the beginning of the 90s following Eritrea’s independence and change in both Ethiopia and the Sudan. However, such prospect was sabotaged as a result of the extremely dangerous unipolar order at the global level, he elaborated.

The President further explained that the supremacist stance emanating from this pattern of thinking gave rise to a dangerous situation of dividing the world into spheres of influence through naked intervention, thus leading to acute confrontation. Hence, the promising prospect of integration was negatively affected, he added.

As regards the situation in Sudan in general and developments in the  South Sudan in particular, President Isaias pointed out that although Eritrea’s firm policy advocates the right of the people of South Sudan to self-determination within Sudanese unity, it nonetheless maintains that the choice which the people of the South Sudan  adopt should guarantee peace and security in Sudan as a whole, and not  be the cause of war. To this end, the President explained that Eritrea has been playing modest role through constructive engagement.

President Isaias further indicated that the new State of South Sudan should guard against 3 man-made dangers, i.e. political system that gives rise to vertical polarization, confrontation along the lines of religion, ethnicity and tribalism, as well as one that fails to ensure equitable allocation of opportunities and resources. Moreover, he stressed the need for vigilance on the part of the South Sudan leadership against external interference that undermines sovereignty.

In connection with developments in North Africa and the Middle East, the President noted that the crisis is the outcome of misrule emanating from family-based politics that marginalized the vast majority of the population. However, such state of affairs was further aggravated through gross external interference, he elucidated. In this respect, President Isaias emphasized the need for putting an end, on priority basis, to such illegal and obstructionist external interference, and providing the indigenous citizens the opportunity to resolve their issues themselves.

He reiterated the dire consequences of family-based politics that lead to the plundering of national wealth by a handful of ruling clique in tandem with foreign parties. In this connection, the President underlined the need for nations to refrain from such a dangerous scenario so that stability and equitable allocation of resources may prevail.

Furthermore, President Isaias underscored the need for restructuring the existing subservient international and regional organizations in view of the dire consequences of the prevailing unjust world order.