Study papers presented in Symposium of Ministry of Marine Resources 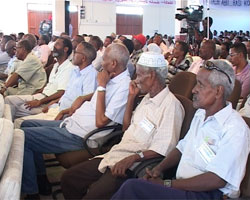 Several study papers were presented at the symposium of the Marine Resources Ministry in Assab highlighting the accomplishments in the sector, the challenges encountered and future work programs.

Assab, 30 April 2011 – Several study papers were presented at the symposium of the Marine Resources Ministry in Assab highlighting the accomplishments in the sector, the challenges encountered and future work programs.

The director general of quality control and service department in the Ministry, Mr. Andom Gebretinsae, indicated that concerted action was taken and encouraging outcome registered as regards boosting consumption of fish products and enhancing export. Over 60,000 tones of fish was exported from 1997 to 2010 on the part of traditional fishermen and industrial boats, he explained.

He further outlined the tasks accomplished that involve issuing permit regarding fishing, determining the amount of fishing per year, declaring marine reserve site, preventing illegal fishing and ensuring the safety and neatness of the sea, among others. Mr. Andom further pointed out that quality control laboratory has been set up in 2001 and is rendering service.

Moreover, he explained that about 1.8 million trees of various types have been planted in about 7 hectares along the coastline, besides to the preservation of 20 hectares of forest in the seashore. There are also plans to breed 20 species of birds in 185 islands. In this connection, Mr. Andom outlined the Department’s 5-year future action plan of the department.

Also in a paper he presented regarding salt production, the manager of Salt Production Plant, Mr. Negasi Goitom, said that the adding of iodine in Massawa salt products has reduced the previously 83% of iodine deficiency level in children to 23%.

Noting that over 600,000 tones of salt were produced from 1993 to 2003 and that 120,000 tones were exported, he highlighted the tasks accomplished since independence, including the renovation and setting up of factories, introduction of salt washing machines and other materials, as well as capacity building.

Furthermore, Mr. Negasi indicated that a machine with a capacity of washing 80 tones of salt per hour was installed in 1995 at substantial government budget. As a result, the content of sodium chloride in salt has risen to over 97% which won high demand in the world market. He further noted that following the undertaking of the necessary renovation in 1991, the salt production plant in Assab is producing 150, 000 tones of salt annually through introducing the requisite machineries.

It is to be noted that the symposium of the Southern Red Sea region concluded yesterday, while that of the Ministry of Marine Resources would continue until May 1.