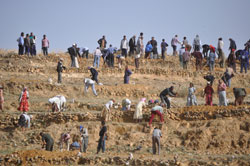 In a statement he made at the commemorative event held in the Central Region, the vice Secretary of the National Confederation of Eritrean Workers (NCEW), Mr. Tsegai Mogos noted that Eritrean workers are making their due contribution by participating in sectors that promote the economic progress of the country.

Mr. Tesegai went on to add that the NCEW is collaborating with different organization on national and regional level to restore greenery and that a six-year plan has been made towards this end.
The Minister of Labor and Human Welfare, Ms. Selma Hasen on her part said that work is the primary factor for development and progress and noted the need for proper administration of both human and animal resources.

Moreover, the chairman of the employers association, Mr. Yemane Tesfay pointed out that strenuous efforts are required to restore the original greenery of the environment.
Also speaking on the occasion, the Administrator of the Central Region, Mr. Kahsay Gebrehiwot underscored the history and contribution of Eritrean workers and called on them to step up their efforts for the successful implementation of the region’s forestation program.

Meanwhile, 3,000 workers from 15 service rendering institutions carried out a forestation campaign in Emba Derho.
In a statement it issued on the occasion of May Day, the NCEW underlined that Eritrean economic progress is based on the equal participation of all members of the society and that it encourages the worker by creating a stable social atmosphere.

The Cause Of The Prevailing Uprising And Instability In The World Are The Forces Of Domination, President Isaias Underscores