The Cause Of The Prevailing Uprising And Instability In The World Are The Forces Of Domination, President Isaias Underscores 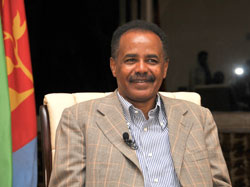 President Isaias Afwerki underscored that the main cause of the prevailing uprising and instability in the world are the forces of domination and exploitation that are undermining peaceful co-existence.

Asmara, 1 May 2011- President Isaias Afwerki underscored that the main cause of the prevailing uprising and instability in the world are the forces of domination and exploitation that are undermining peaceful co-existence.

The President made the remarks in the third and final part of the interview he gave to the local media outlets tonight. These same forces resort to ill-devised political, cultural, social, economic and military policies to in order to secure their interests at the expense of the resources and labor of other peoples and nations, he elaborated. President Isaias further pointed out that the acts of military adventurism in different regions of the world have been used to this end.

He noted that the consequences the new world order has inflicted in different parts of the world have given rise to the elevation of global awareness, thus shortening the life span of the age of domination.

As regards to the so-called post Cold War US-led world order, the President pointed out that the distorted philosophies and pattern of thinking aimed at serving western interests are collapsing as a result of the growing popular awareness at global level.

In reply he gave to a question on the role of the media in the popular uprising in North Africa and the Middle East, the President stated that “free press” as a concept has been eroded over the past 20 years, and hence the need arises to critically asses the consequences of the information propagated by the media conglomerates of the contemporary world.

President Isaias also highly assessed the role of the people against all odds over the past 20 years since independence, especially in the task of safeguarding national sovereignty and the implementation of development programs. Nonetheless, he emphasized the need for demonstrating still greater steadfastness in the years ahead.

The South Reviews Stories Of Beauty And Success