Interview with the Minster Fawzia Hashim 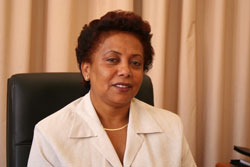 The Ministry of Justice will hold a symposium in Keren town from 2 to 4 May. The Minister of Justice, Ms. Fawzia Hashim conducted an interview with ERI-TV concerning the endeavors undertaken over the past 20 years in connection with the upcoming symposium. Excerpts follow:

Let ‘s start with the primary tasks of the Ministry of Justice?
Our mission is to extend fair, reliable and just services to the public. To realize these objectives, the Government of Eritrea was compelled to make basic amendments to the previous justice system. The existing legal system before independence didn’t reflect the socio-cultural and traditional values of Eritrean society. Accordingly, revision of the various legal codes was inevitable so as to provide efficient services.

Civil and criminal laws were drafted in 1987 by the EPLF which in turn played significant role in adopting proclamation No 1/91 and other 8 proclamations. Based on the proclamation No. 1/91 regarding the formation of fundamental justice system, the Ministry has been engaged in ratifying rules, offering counseling to companies and government agencies, besides appointing lawyers, judges and prosecutors. Not only this, expanding justice institutions, introducing up-to-date work procedures and promoting human resources capacity were also part of the Ministry’s endeavors.

Can you tell us about the challenges the Ministry has overcome thus far?
Only a handful of people were practicing law professionally and court facilities were available in few places. Thus, first priority was given to upgrading human capacity. In this regard, about 130 graduates from higher education institutions have joined the Ministry within the past five years. Another 345 students graduated from the school of law located in Mekerka and are currently discharging their duties.  On-job training courses are also being organized to upgrade lawyers’ competence.

Meanwhile, the existing community courts are making due contribution in providing legal services to the public. Efforts are underway to upgrade the capacity of these courts.

In general, we intend to nurture law experts who have broad understanding of the society’s historical background, traditional lifestyle, culture and political system. In this manner, the justice system would have great impact in ensuring social stability, reinforcing economic progress and maintaining traditional values.

What efforts have been made to study and collect customary laws?

For the last six years, research has been conducted to study the difference and similarity of customary laws so as to compile a tangible document. The information gathered would be used as reference for the drafting of other laws and will also be preserved for the next generation.

What is the future work program of the Ministry?

Reviewing proclamations, strengthening training centers, upgrading public awareness, promoting the number of professionals in terms of quality and quantity are some of the major programs of the Ministry.

The South Reviews Stories Of Beauty And Success