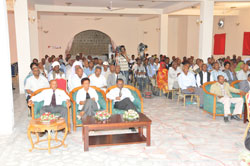 In closing remarks, the Minister of Justice, Ms. Fawzia Hashim, indicated that concerted action is being taken to implement basic laws on priority basis, besides upgrading the competence of law professionals and raise public awareness regarding law. She further called on the society to strive in preserving the cherished principles and values as regards administration of justice.

Various study papers were presented in the course of the two-day symposium focusing on basic laws, the role of law in the Eritrean society, community-based administration of justice in Eritrea, developing human resource and the tasks of attorney. Besides, a 45 minute documentary film highlighting efforts exerted in strengthening administration of justice was presented.

Alongside the symposium, an exhibition portraying the accomplishments of the Ministry over the past 20 years was staged.

Inhabitants of Foro Commend Implementation of Development Prgrams in the Area