Symposium of the Anseba region opens in Keren 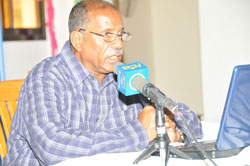 Symposium of the Anseba region was opened today in Keren town under the theme: “Eritrea: 20 Years of Dignity.”

Keren, 5 May 2011 – Symposium of the Anseba region was opened today in Keren town under the theme: “Eritrea: 20 Years of Dignity.”

The regional Administrator, Mr. Gergis Girmai, outlined the commendable active participation of the people in the implementation of multifaceted development and reconstruction programs, as well as reinforcing the integrated national rebuff.

He pointed out that over 2.5 billion Nakfa was invested in the region in putting in place infrastructure facilities, expanding health, education, potable water supply and ensuring social security and agricultural development. As a result, the general public has become beneficiaries of basic social services, the Administrator added.

Mr. Gergis further noted that concerted action was taken to promote soil and water conservation activities, and that 75 big, medium and small micro-dams and water reservoirs have been constructed, in addition to 5 water diversion schemes.

Noting that putting in place service-rendering institutions has become the precondition for regrouping scattered villages and improving the people’s lifestyle, he highlighted the tangible achievements registered in expanding mobile and fixed phone service and transport service.

Mr. Gergis said that future action plan of the region would focus on expanding potable water supply, construction and renovation of schools, construction of regional referral  hospital and health stations, construction of 7 micro-dams and 5 water diversion schemes, as well as residential complexes, among others.

Alongside the symposium, an exhibition was opened portraying the accomplishments registered in the region over the past 20 years in the domains of health, education, agriculture, infrastructure and others. The Minister of Local Government, Mr. Woldemichael Gebremariam, opened the exhibition. Pictures and other materials are also being staged depicting the customs and traditions, tourism attractions and economic ventures, among others.