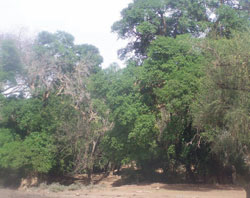 The main expense in traditional Hedareb weddings is the dowry. Although the amount of dowry might vary, often families unable to come up with the amount required get the assistance of neighbors, friends and relatives.

On the average, the expenses for a wedding come to about 2 quintals of crop, 2 quintals of palm seeds, 15 kilos of coffee, 30 kilos of sugar, 5 kilos of ginger, three goats and butter are the average  supplies needed for holding a traditional Hedareb wedding.

Once the groom takes the bride and arrives at his house: the father of the groom holds a reception that lasts for seven days. During the duration of which, traditional dance and songs are performed by the groom and his friends add color to the event. Friends of the groom spend the seven days of festivity at the house of the groom and contribute goats that are slaughtered and be eaten during those days; they also give some amount of money to the groom.

During those seven days of festivity, the bride is not allowed to see the groom. On those days she will braid her hair, receive presents from relatives and friends, and she will eat the food and drink considered to have high quality.

After the seven day festivity end, the friends of the groom will return to their respective houses. After this day the bride and the groom begin their honeymoon that lasts for a year. During this time the bride do only menial chores like milking, sewing and the like. The other chores are done by her mother in-law but the groom starts his tasks on the fourth day, and after one year the husband bestows a goat to his wife as an outcome of his one –year work,  which also symbolizes the end of the honeymoon period. In  occasions where there is no one to help the bride with the house chores or the family has an economic problem both the bride and the groom will shorten the honeymoon period.

There are also few exceptional traditional wedding ceremonies among the Hedareb.  Mera’a Hayam is the weddings were couples are wedded for the second time.  Those weddings are held in occasions where couples have lost their spouses in divorce or death. The dowry and the festivities held during such type of weddings are different than those of the couple wedded for the first time. The dowry in the Mera’a Hayam covers one-third of the dowry of the usual wedding. Although Mera’a Hayam is not frequented among the Hedareb, the individuals wedded through this kind of wedding are neither discriminated nor lose their rights as members of the society.
Mezraf is the process where the man kidnaps the woman or the girl that he wants to marry. Mezraf or elopement happens on situations where the man is unable to marry the girl or woman of his choice. Mezraf is forbidden among the Hedareb, and the man is shunned. He is forced to flee the area once he took the woman or the girl he wants. During such situations, there is no dowry or presents exchanged, and the entire process is considered as a taboo among the society. Hence, such types of marriages do not happen frequently.

Universal and EriArtistas- Profile of Musicians set to perform on Independence Day Celebrations.(part I)