Universal and EriArtistas- Profile of Musicians set to perform on Independence Day Celebrations.(part I) 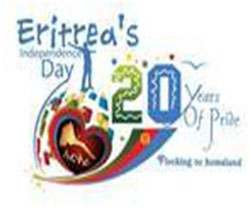 20 Years of Pride
As preparations for the grand 20th Independence Anniversary celebrations get underway, it comes as no surprise that music will take center stage. Eritrea’s history is a story shared in the music of Eritrea past and new.

During struggle for independence, music and drama was used for education and mobilization and it was a means of expressing the hopes, pains and suffering of the people of Eritrea. Eritrea fought and won the liberation struggle without any external help, relying only on themselves. After Independence, music played a vital role in mobilizing support for the rehabilitation and development of Eritrea. Once again, Eritreans continue to rely on their own ingenuity and resources to rebuild their country from scratch and they have made remarkable progress, unparalleled in all of post independence Africa.

At this historic juncture, musicians and artists from all over the world will converge on Asmara to participate in the historical event. There will groups such as Planet Awarded UMOJA from South Africa, Fulani from Germany, East African Superstars, Jackie Chuandru and Jose Chameleon from Uganda and others.  Amongst the many productions that will be on display in Eritrea this year will be a musical collaboration by Eritrea’s  artists such as Eriam Sisters, NJOY, Betty Zere, Sandman Negus,  and many more.  This production which will depict Eritrea’s illustrious history and post independence success and showcase the talents and diversity of Eritrea’s artists, as well as Eritrea’s music. Come join us, come to Eritrea’s art deco capital with its tree lines boulevards and roadside café’s and share in the musical extravaganza which will take place from 14-24 May 2011. We hope to see you in Asmara Eritrea!

EriAm Sisters – Seattle USA
The Eriam Sisters (Eritrean American Sisters) is a music group who became known after their appearance on America’s Got Talent 2009. There, they sang Michael Jackson’s song “I Want You Back” which aired just a day before he died. The sisters were seen as the next Destiny’s Child by the judges of America Got Talent. Specially Piers Morgan was very excited and told the girls “you are the future”. He said this after the girls performed the song “crazy in love” by Beyonce. Although their name was known mainly because of America’s Got Talent show, the girls were performing for years together. Some of the songs they recorded when Haben was only 8 years old is imply incredible. These historical and astonishing voices are found on Reverb nation site. Seattle Theater Group featured the girls as the best young artist of the year 2009 and Mayor Denis Low handed the girls a key to the city for their extraordinary contribution to music at such a young age. They are also admired for their contribution to support many local charity organizations. In 2010 the sisters received another award from the king county executives for excellence in music”.

NJOY – Gothenburg Sweden
This promising POP/R & B group consists of the three
Friends, Ruth Mussie, Irena Krsteva and Jerusalem Yemane, who grew up in Gothenburg. With music as their passion they have both studied and practiced music since childhood.
With their style, sound and talent, these girls fill a void in the Swedish music scene. They have released a debut single”Schizo” and are currently working with materials for their coming album.

Calle Fleur, critic at King-size Magazine, writes about NJOY:
“It’s about time Sweden got their own Destiny’s Child”
(King-size magazine No. 2, 2009)

Andreas Carlsson, producer and songwriter (Jury of”Idol”),
impressed by the girls’ live performance, expressed following: “That was fantastic, you have a lot of potential … I’m actually very surprised that there is a girl band in Sweden at your level ….you are very talented and I would like to work with you “(Andreas Carlsson, Feb 2009)

Betty Zere – Stockholm Sweden
Born in Stockholm with a unique voice – About how music makes her feel she says, “Music makes me feel complete and sharpens my emotions”. She discovered the variety and beauty within the many different styles of music like Jazz, Soul, Fusion and R&B. Her voice was always eager to find challenges in different languages and styles. I have always loved singing. It feels very natural to me, but it took me a long time to actually sing in public or even think of taking it further. No matter how hard you try you can never kill a real passion for something. Beside music, I always felt myself drawn to basically all art forms. I think they are great gifts for us to express our inner world and feelings, which often can’t be explained in plain words, especially those overwhelming feelings that leave us speechless. Like colors on canvas give us a great sensation, so can a piece of music, lyrics or dance. What else can you do, but love it!

Sandman Negus (Sador Feshaye) LA – USA
Eritrean-American rap singer has lived in Los Angeles since the age of 7, but he has not forgotten his Eritrean heritage. In some of his songs he mixes Tigrigna music with English rap lyrics. Using the stage name Sandman, Sador started singing rap music at the age of 12. By age 15 he started recording. Born in Bulgaria in 1986, he moved to U.S with his parents from Sudan at age 7. Sandman`s songs are about his childhood period of war, and life in California. On August 2, 2008, after leaving the studio to take a friend home, he was shot nine times, due to south central gang violence. He was shot in his colon, liver, both lungs, left and right diaphragm, shoulders and his neck. He had to undergo seven surgeries and was in a coma for 26 days. Despite the entire trauma that Sandman has faced, he still was able to recover from the shooting and use music as his therapy.

Fulani – Solingen Germany
Music and Dance forms are at the centre of all African arts and culture. Music plays an integral role in the celebration of life’s many rituals and accompanies everyday activities. The Fulani music is as varied and rich as its people. The numerous sub-groups all maintain unique repertoires of music and dance. Songs and dances reflect traditional life and are specifically designed for each individual occasion. Music is played at any occasion: It’s been a long time in the making, but now, finally, Fulani’s debut album Muziki FULANI/ FULANI Music is out.  Musically, the songs are a combination of various styles of music resulting in a unique sound, best described as Afro-fusion.  Songs are combine catchy R&B inspired melodies with riveting zouk and taarab grooves, while others like Cha Cha Cha and Saira combine elements of hip-hop with pulsating soukous rhythms, which can also be heard on Mwanamberi, Fulani’s own rendition of a collection