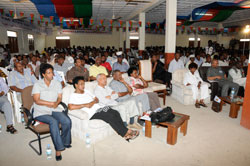 Eritrea’s pristine coastal areas harbor a wide range of marine resources that consists of many species of fish, coral reefs, and a large number of sea animals among others. According to reports from the Ministry of Marine Resources, around 1,000 species of fish have been recorded in Eritrea’s part of Red Sea.  The Symposium of the Ministry of Marine Resources that was held along with the symposium of Southern Red Sea Region Administration enabled the participants to become acquainted with coastal resources through a lengthy travel along the coastal lines.

Conducting such a symposium in an area characterized with abundant marine resources has partially represented the overall resources of Eritrea’s Red Sea through just a glimpse. Besides, the participation of fishermen from Northern Red Sea and Southern Red Sea Regions created a good discussion atmosphere, particularly as regards fishing activities. And also, undertakings of marine resources development, National Fisheries Company, salt production, Human Resources development and monitoring marine resources and services were also discussed in the symposium.

Annually around 80,000 tones of fish can be harvested in Eritrea’s coastal areas and of which the 50,000 tone are anchovies and sardines. In a view point of harnessing such resources effectively, a number of fisheries institutions have been set up since the wake of independence. Beylul Fishing Company, ERIFISH–fish processing plant, Eritrean Marine Products companies in Asmara and Assab, REFCO–Refrigeration Company, Eritrea Diving Center, Harena Boats Factory, and ice factories have been playing significant role in optimizing fisheries activities. All these fisheries institutions have been functioning under the National Fisheries Company which was established in 2004. Since 2005, however, the National Fisheries Company was split into two enterprises that have been engaged in fishing, and in processing and distributing fish products.

Though artisanal fishing activities has been practiced to date, a great deal of fish production has been harvested through industrial fishing. As highlighted in the symposium the National Fisheries Company plans to increase fish export level, expand fish distribution to local markets, and conduct marketing studies and implement varied fisheries infrastructure program.

The Department of Human Resource Development has also been engaged in cultivating professional on diversified disciplines to solve the deficits of specialists in the marine resources sector. Accordingly, a number of students have been graduated from higher educational institutions. Hirgigo vocational training center has been offering trainings on navigation, fishing techniques, basic motor repair and other courses to veteran and novice fishermen. Likewise, College of Marine Sciences and Technology has also been providing education on marine biology and fisheries, aquaculture, marine food technology, marine bio technology, and marine engineering at degree and diploma levels.

Modern fishing was started in Eritrea during the Italian colonial era. However, it was not developed in the pace it started during the Ethiopian colonial period. Experiences gained through fishing activities that were conducted in Berite and Manzanar during the period of armed struggle have therefore become foundation to the fisheries resources development in the post independence period.

Taking into account the given potentials and opportunities, a five-year plan has been charted out to introduce community-based aquaculture in seawaters. Similarly, such undertakings would be implemented on fresh waters in different parts of the county thereby to make substantial contribution to the endeavors that have been made towards achieving food security. Upgrading and establishment of new fish landing and processing sites, introduction of advanced fishing equipment, upgrading the capacity of boat repairing plants, developing marine science researches are also part of the comprehensive plans of the next 5 years.

Salt production was also among the topics presented in the symposium. Massawa and Assab salt production plants have been processing iodized salt, which in turn played significant role in the reduction of iodine deficiency on children and eradication of goiter. Massawa salt production plant has gained international accreditation certificate and medals for the endeavors it has made in distributing high quality salt production. Bering in mind that salt could be utilized in colors manufacturing, food processing and packaging, in textile, turnery and soap factories among others, new salt refinery would be introduced in the near future.

Fisheries management and regulations was also major topic of the symposium. Even though Eritrea’s coastal bio-diversity is at good conditions, in the spirit of continually possesing one of the best coastal areas, proclamations that could secure the marine resources sustainability were issued in 1998. Fisheries management regulations have also been issued to prevent illegal and unregulated fishing activities, thereby to protect it from any danger that could pose threat to the marine resources. Fish inspection and quality control have also been regularly conducted to ensure the health of fish productions.