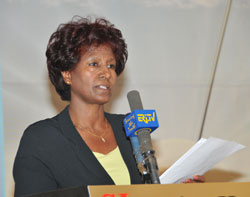 Symposium of the Ministry of Tourism was opened today in Keren town.

Asmara, 7 May 2011 – Symposium of the Ministry of Tourism was opened today in Keren town.

Speaking at the opening session, the Minister of Tourism, Ms. Askalu Menkerios, indicated that the Government has been doing its level best to develop the tourism sector through exploring tourism potentials and introducing effective work methodology.

She further pointed out that the Ministry has mapped out a 20-year national action plan with a view to properly harnessing the available rich tourism potentials of the country for the benefit of generations. Ms. Askalu indicated that it has adopted various regulations, directives and control mechanism, and thereby issued work permits to business enterprises.

The Minister stressed the paramount significance of the development programs being undertaken through Warsay-Yikaalo Development Campaign in promoting the development of the tourism industry. Moreover, she indicated that over 2,700 nationals have received training from the Tourism Training Center, in addition to 150 youths who graduated from College of Halhale in Hotel and Tourism Management.

Also in a paper he presented at the symposium, the director of the Office of the Minister, Mr. Tesfalidet Michael, outlined the tasks being undertaken to effectively harness the nation’s tourism potentials.

Likewise, Mr. Mesfin Mihreteab who presented a paper on the development of tourism in the country noted the background of tourism in Eritrea, as well as natural and geographical resources. He stated that the Ministry is implementing various programs focusing on putting in place infrastructure facilities in coastlines and hot springs, as well as setting up museum and renovation of historical sites, among others.

Similarly, the director of human resource development and training, Mr. Tekle Frezgi, pointed out that more than 200 people are receiving training inside the country and abroad so as to upgrade human capacity.

Director of promotion branch, Mr. Hagos Woldu, stated that wide-range promotion materials are being distributed along with facilitating tourism services so as to attract tourists.

Meanwhile, an exhibition depicting the accomplishments of the sector was opened by the Minister of Energy and Mines, Mr. Ahmed Haj Ali.