A glimpse at Anseba Region’s 20 years of Development 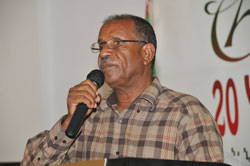 Anseba region is a place where three Eritrean ethnic groups who have varied languages, religious and cultures live together in harmony. One could easily notice the diversity of the major ethnic groups of Tigrinia, Tigre and Bilen in inhabiting the area, while at the same time, sense the spirit of unity amongst them. The inhabitants estimated 429,000 are engaged in agriculture, agro-pastoralist and business ventures. For many years, they were deprived of development trend in their region instead they were prone to drought, war and poverty. After independence, nevertheless, the Government of Eritrea has envisaged and implemented development programs that would pave a way for modernization and improve the living standard of the inhabitants. It was concerning the development journey of the Administration of Anseba region in the past 20 years of independence that a symposium was held in Keren town from May 5-6.

Speaking at the symposium, the Administrator of the region, Ms. Gergis Girmai, pointed out that the participation of the inhabitants was commendable in effectively carry out development projects. He also indicated that over 2.5 billion Nakfa was invested to develop infrastructure facilities including agriculture, health, education and social services. The Administrator went on to say that scattered villages were integrated to avail themselves to the provided facilities.

Basic infrastructure facilities have been put in place to speed up all-round development activities in the region. Currently, the region is divided into 10 sub-zones comprising 2 towns, 110 and 516 and infrastructure system is expanding evenly. According to the study paper presented by Mr. Gebru Haile, head of infrastructure division in the region, various service-rendering infrastructure projects including 273 educations and 75 health programs were executed. He indicated that 73% of the population has now got access to potable water supply. This has made great contribution in reducing diseases inflicting inhabitants due to unsafe water.

The construction and renovation of roads and other transport systems have rose number of beneficiaries to 63%. Along this, accesses to mobile and fixed telephone services were upgraded in region. Power supply was also distributed to 6 sub-zones and 25 villages which in turn increased number of users from 1,400 to 11,500. Not only this, market places, residential houses, government buildings and other service-rendering establishments have been constructed. Furthermore, master plans for 2 towns and 9 villages have been drafted; in addition land allotment to about 20,000 nationals for residential, business enterprise and farming purposes. Mr. Gebru said: “The implementation of the infrastructure projects have created wide job opportunity for local inhabitants.”

Though, Anseba region possess 3,680 hectares of potential agricultural area and large rivers of Anseba and Barka, its agricultural product was insufficient. Thus, vigorous efforts were made to augment agriculture products so as to achieve food security.

On study paper presented regarding the undertaken works in agriculture in the past 20 years, it was disclosed that constant training courses were organized to acquaint farming communities with modern agriculture methods. Select seeds and fertilizer were also distributed to farmers. As a consequence, farm land put under cultivation has increased    by 48% and agriculture outputs improving from time to time.  Beside, soil and water conservation activities have been carried out through public campaigns. Around 80 dams, micro-dams, ponds and water diversion were constructed. These undertaken have made due contribution in enriching surface and underground water resources. On top of this, number of livestock is showing growth thanks to the extensive vaccination programs availability of animal feed.

Along this, expanding equitable healthcare service was among the major development projects implemented in the region. Mr. Zekaria Ogbasellasie, head of the branch office of Ministry of health, explained in the symposium that a total 36 health institutions have made available to the inhabitants. He added that number of health personnel has rose by 600% and the inhabitants are changing their attitude towards the advantages of modern healthcare. “Mother and child mortally rates have dropped significantly. Besides, the extensive vaccination programs conducted in the region have played vital role in reducing a number of diseases,” Mr. Zekaria.

Also, impressive achievements have been registered in distributing equitable educational opportunity. Mr. Bokresion Hailmichael, head of the branch office of Ministry of Education in the region, disclosed that there exist about 275 schools and student enrollment showing commendable progress. Adult education program is bearing fruitful outcome especially from 2007 onwards he added.

Mr. Bokresion indicated that increasing female student participation, building new schools, reducing illiteracy rate from 44.5% to 20% by the year 2015 are major programs of the branch office of the region.

Following this, the Director of the Administration office, Mr. Fistum Gebrezigabher, gave briefing on the activities of the branch of offices of ministries of labor and human welfare, tourism, trade and industry, and the association of war-disable veteran fighters. He said that many orphans, street children and other needy families have been rehabilitated and are now leading better live.

Mr. Fistum further stated that the construction of asphalt and earth roads, modern hotels, eco-tourism industries, installation of electricity and telephone services are reactivating tourism potential in the region. Studies have been conducted in 3 ancient monasteries, 4 historical sites, and 21 ancient building and domestic tourism intending at enriching the already known facts he added.

Anseba region, which is 22,834 square kilometers, embraces various historical places, ancient monastery, wildlife on verge of extinction and other tourist attraction sites. Its landscape is characterized by mountain and valley, which makes the fourth largest Eritrean region unique.