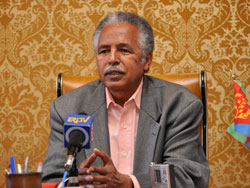 The Administrator of Central region, Mr. Kahsai Gebrehiwet, stated that it has been possible to obtain bumper harvest from small farmland as a result of the vigorous endeavors exerted over the past 20 years.

Asmara, 9 May 2011 – The Administrator of Central region, Mr. Kahsai Gebrehiwet, stated that it has been possible to obtain bumper harvest from small farmland as a result of the vigorous endeavors exerted over the past 20 years.

In an interview he conducted in connection with the forthcoming symposium of the region that would be held from May 10 to 11, the Administrator lauded the cherished culture of hard work among the people. Mr. Kahsai indicated that although there exists shortage of ample land for cultivation, the region is now in a position to be self-sufficient as far as grain is concerned thanks to endeavors made to harvest three times a year.

He further pointed out that qualitative change is being witnessed in crop harvest as the farmers are practicing drip irrigation. Also in line with efforts to boost fruits, 7 fruits which could be cultivated in the  highlands have been  identified and have already borne encouraging outcome.

Noting that prior to independence there existed wide gap between rural and urban centers, Mr. Kahsai stated that a number of major urban areas with better social services have come into being in the post-independence period. Modern road networks have also been constructed so as to link them one another, he added.

The Administrator said that out of 84 villages in the region, 61 have already got access to reliable electricity service, and that the remaining ones would become beneficiaries of power supply in the near future.

He further explained that contrary to a number of African countries in which there exists expansion of slams and high population density in major cities which is posing a big problem, the Eritrean government has managed to tackle such a problem at the earliest. Efforts are also underway to expand social services and infrastructure facilities in the existing slums, the Administrator elaborated.

Mr. Kahsai called on the general public to step up participation in the ongoing endeavors to achieve food security.