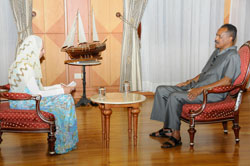 President Isaias Afwerki said that Eritrea’s equitable economic progress based on social justice symbolizes its promising prospects.  He made the salient remarks in an interview he gave to Al-Ahram newspaper.

Asmara, 11 May 2011 – President Isaias Afwerki said that Eritrea’s equitable economic progress based on social justice symbolizes its promising prospects.  He made the salient remarks in an interview he gave to Al-Ahram newspaper.

Replying to a question regarding the unjust and illegal sanctions resolution, President Isaias pointed out that although the US-engineered ploy that fully attests to the bankruptcy of the UN was designed to subjugate the nation, it was dealt integrated rebuff on the part of the Eritrean people that frustrated its authors. In this respect, he explained that Eritrea is in no need of firearms, but rather construction materials and agricultural tools.

As regards the role of non-governmental organizations, the President indicated that such entities operate as a substitution of national governments and spying instruments of external forces. In doing so, they paralyze not only the domestic  capability of societies but also the spirit of working in unison and partnership, thereby ultimately nurturing the culture of dependency and relief handout. As such, these organizations have no place at all in the Eritrean culture, he underlined.

On the popular uprising witnessed in the Middle East in general and Egypt in particular, President Isaias said that although it is natural and acceptable for people to oppose suppression, the developments of such an uprising call for patient and deep scrutiny in view of the fact that it surfaced without clear program, leadership and organization. In this connection, the President stated that the concerned national forces are expected to remain vigilant so that the revolution may not be undermined by external forces short of succeeding to fulfill the aspirations of the people.

Regarding the issue of multi-party, President Isaias explained that democracy and political pluralism are realized through domestic developments of people giving rise to specific socio-economic system, equitable allocation of resources and peace. He underlined that the western style of democracy that runs counter to the prevailing reality and paves the way for external interference through fomenting division along the lines of religion, tribe and region is not acceptable at all.

Also in a replay he gave regarding ongoing attempts on the part of western countries and subservient regimes to set up a transitional government in Somalia, the President indicated that all foreign-orchestrated repeated attempts to set up a transitional government in that country failed to bear any fruit, as no chance is given to Somali nationals to resolve their issue themselves. In this respect, he pointed out that western forces and subservient regimes need to refrain from acts of interference  so as to establish people-based central government in Somalia, put an end to piracy in the region and ensure the reconstitution of the Somali State  that would play  due role in the region.

Moreover, President Isaias noted that the volume of Nile River waters is abundant that could serve generations as long as joint cooperation,  investment and trade are ensured among the countries in the region. Pointing a finger under the pretext of the Nile River is but an act for political consumption only, he underscored.