Symposium of Ministry of Labor and Human Welfare Opens 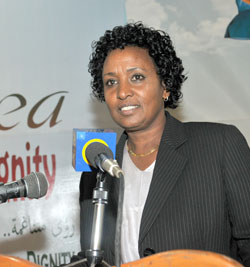 The symposium of the Ministry of Labor and Human Welfare opened in Asmara today under the theme “Eritrea – 20 Years of Dignity”.

Asmara, 12 May 2011 – The symposium of the Ministry of Labor and Human Welfare opened in Asmara today under the theme “Eritrea – 20 Years of Dignity”.

Speaking at the opening session, the Minister of Labor and Human Welfare, Ms, Salma Hassen, said that a number of control mechanisms have been introduced in various institutions so as to ensure labor safety and that of the workforce over the past 20 years. She also explained that 230 unions comprising 20,000 members have been formed, and that 114 labor agreements were concluded.

Minister Salma further indicated that school materials have been distributed to needy children, in addition to the provision of vocational training and that 28,000 families have received support for taking care of about 70,000 orphans.

The Minister further pointed out that over 2.1 billion Nakfa has been disbursed to assist families of fallen heroes over the last 6 years, and that Eritrean nationals both inside the country and abroad have contributed over 130 million Nakfa to about 10,000 martyrs’ families. Moreover, Ms. Salma explained that the Government has rehabilitated over 30,000 returnee nationals, besides paying more than one million Nakfa monthly in pension to those citizens expelled from Ethiopia by the TPLF regime.

In a paper he presented at the symposium, the director general of labor department, Mr. Woldeyesus Elisa, said that Eritrea has become member of the International Labor Organization (ILO) in 1993 and is making relentless efforts to ensure the rights of both employees and employers. He further explained that regulatory mechanism has been put in place as regards work environment

An exhibition highlighting the activities of the Ministry over the past 20 years was opened by Mr. Al-Amin Mohammed Seid, Secretary of the PFDJ.

Programs on Independence Day celebrations to be broadcast directly from Assab