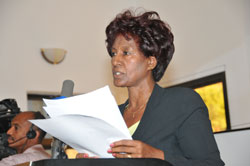 Many tourists have expressed admiration to Eritrean historic ancient sites, salubrious weather coupled with the hospitable culture of the society. It is estimated that there exist around 100,000 ancient and historical sites all over Eritrea. Antique buildings in Asmara, Massawa and Keren, Islands of the Dahlak Archipelago, the area around Semenawi-Bahri, decades old railway systems as well as the sites of Qahaito, Metera and Debre-Bizen are identified as the most commonly visited tourist sites in Eritrea in recent years.

Hence, the Ministry of Tourism has been gearing up to promote Eritrean tourism industry and provide the necessary facilities for its growth. In connection with the above stated fact, the Ministry has conducted its symposium in Keren town from May 7-8 to evaluate its achievements, shortcomings as well as map out future plans.

In an opening speech she gave, the Minister of Tourism, Ms. Askalu Monkorios, stated that the Government has made vigorous efforts to develop the tourism sector by identifying tourism potentials and introducing modern work procedures meant to bolster income from tourism.

Ms. Askalu further added that the Ministry has outlined a 20-year national action program intended to properly harness the available rich tourism assets for the interest of the general public on top of indicating that it has adopted various regulations, directives and quality control mechanism, and thereby has been issuing work permits related to tourism to investors in this sector.

In the manner of judiciously exploiting the rich tourism resources of the country and increasing revenue, as well as striving to propagate the right image of the country to the world, the Ministry’s mission is to make Eritrea one of the main African tourist destinations countries.

In the course of the symposium, Mr. Tesfaledet Michael, director of the office of the Minister, discussed the mission and policy strategy of the Minister in detail. He says, Eritrea has become the 122nd member of World Tourism Organization in a conference held in Cairo in 1995. The National Tourism Development Master Plan of 2000-2010 was also drafted in 1998. Furthermore, additional regulations regarding tourism and structure of the Ministry for the past 10 years were prepared.”

Also, Mr. Mesfin Mihreteab, from the department of tourism promotion explained the background of tourism in the country and natural and geographical resources in a paper he presented on the development of tourism. He stated that the Ministry is implementing various programs focusing on developing infrastructure facilities in coastlines and hot springs, setting up museum and renovation of historical sites, among others.

Parallel to this, upgrading manpower in terms of quality and quantity is vital to render efficient service. In this respect, the first Eritrean Hotel and Tourism Training Center was opened in 1998 and graduated 110 students. A diploma program was also commenced in 2005 in collaboration with Business and Economics College.  Mr. Tekle Firezgi, Director of HRD at the Ministry, said that the Ministry has registered commendable achievements in upgrading human capacity. He said that the general negative perception regarding working in restaurants and bars of the public has changed the tourism profession was accepted as important career. Mr. Tekle further explained that services in restaurant and hotels have shown a marked increase as a result of the efforts applied in human capital development and systems of managing taught. He further noted that the tourism sector offers many job opportunities for unemployed nationals.

The director of promotion branch, Mr. Hagos Woldu, stated that wide-range promotion materials are being distributed along with facilitating tourism services so as to attract tourists. He said that about 111 posters, magazine, films, photo exhibitions and the like have been prepared. Mr. Hagos indicated that organizing tour, advertising domestic tourism, participating in international photograph competition are some of the future programs.

On the second day of the symposium, Mr. Mohammed Idris, director of tourism service, presented a paper on tourism service in the past 20 years. He said that the number of service-rendering institutions has increased by 400%. At present over 50,000 employees are working on the sector and over 2,700 nationals have received training from the Tourism Training Center, in addition to 150 youths who have graduated from College of Halhale in Hotel and Tourism Management.

After this, Mr. Haile Alazar, director of the branch office of statistic and research, explained the statically number of tourists visiting the country and the impact of tourism on the socio-economic of the society.  Mr. Solomon Abreha, chairperson of the association of service rendering enterprises, highlighted the development of service-rendering institutions.

At the closing of the symposium, Ms. Askalu pointed out the importance of the session in evaluating the strong and weak points. She also added that efforts would reinforce to cherish and preserve Eritrean rich tourist sites as well as promote domestic and foreign tourism.

Victories of the Struggle and the growth of the National Force