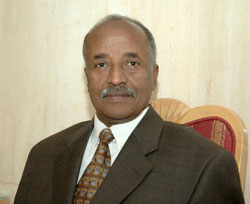 Eritrea working hard towards regional stability and peace: Minister Asmara, May 15, 2011- Eritrea is working hard to make a contribution to regional peace, security, justice and equality on the basis of robust and constructive engagement, according to the Minister of Foreign Affairs, Mr. Osman Saleh.
In an interview he gave in connection with the forthcoming symposium of the Ministry of Foreign Affairs that is to be held on Asmara Palace from 16-18 May, the Minister stated that the nation’s endeavors are essentially focused on securing peace, stability, development and cooperation in the wider Horn of Africa and the Red Sea regions. In this respect, the Foreign Minister underscored that Eritrea would work diligently in efforts to transform the conflict-stricken region that is assuming dangerous trends into a cooperative and peaceful region.
Mr. Osman went on to say that Eritrea’s constructive engagement on regional and international matters stems from its firm conviction that a conducive external environment is imperative for ensuring development and facilitating the nation-building process. He also commended the contribution of the Eritreans residing in the Diaspora towards the national development drive and the strong popular, diplomatic and media resolute rebuff they waged against the unjust and illegal Security Council Resolution 1907, which provided vital impetus in strengthening national unity.
Pointing out that Eritrea has made a positive  impact on nations and international organizations combating the acts of hostility and conspiracy it has been subjected to , In this respect, the Foreign Minister concluded his interview underlining that  Eritrea’s public and diplomatic resolute rebuff would continue until the set goal are achieved.