Q & A with Jackie Chandiru 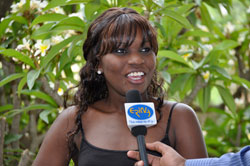 A number of foreign and Eritrean musicians have arrived to Eritrea to stage music performance in the occasion of 20th independence anniversary. Numerous musicians from Uganda, Senegal, Barbados, Peru, and Germany have already arrived. Shabait.com has conducted a brief interview with Jackie Chandiru from Uganda. Excerpts follow:

To begin with, could you tell us about your music background?
I started playing music in a competition called Coca Cola Pop Stars. We were three winners from the competition that was held and we decided to form a group. Four years later we all decided to try out our luck in solo careers.  That is how I got started in music and that brought me here.

What sort of music do you play back in Uganda?
In am a “Lugbard”, from the Northern part of Uganda. So I mix my local language with English. But, people like “kidandali”—a kind of music which is a very danceable.

Have you produced recorded music?
I have four albums done. But I have just released four singles. As a solo artist, however, I have produced one album which will be released in about a month later.

What is it like joining the music industry, particularly when you were a beginner?
It is very challenging especially in Uganda. Most of the popular musicians are men. It is like being a baby competing in an adult world. It is crazy to make a name for yourself when the industry is dominated by men. That is the biggest challenge I faced. But, today, with the help of the almighty I comfortably stand shoulder to shoulder with other Ugandan male artists.

What was the response of the audience to your first performance on stage?
Every body was just watching to see what I could do. Everyone was like this are pop stars, how are they going to defend their title? Uganda was by then fairly conservative. Even the way you dress and dance could be a problem. We were trained in South Africa and made to be like pop stars. Yet it was not allowed in Uganda. It was crazy, the first time I staged; people were looking and determining to see if we can do it.

Could you also tell us about the particular style of music you prefer playing?
I play all kinds of music from garage to reggae, raga, jazz, ballad and others. I try mixing all music styles in my songs. As I am also a producer, I tried to mix every thing in all sorts of music.

What was your knowledge about Eritrea, before you visit the country and now?
I just knew Eritrea to be a small country in the horn of Africa, a country with a lot of plateaus in the geographic side of it. At first I didn’t know much about it, but slowly started to learn for I had made Eritrean musicians friends.

So now have you become familiar with Eritrean Music? If so, what’s your impression of it?
To be honest, I like the music that’s played here. Because, most of the time when musicians are singing, they forget culture, tradition and where they are from. But, music in here is traditional. Even when some body is doing the hip hop; they still have the traditional instruments to play other styles of music. The way you sing is also different, it is not like some body singing in English or another language. Listening to the music, one could tell, this is Eritrean music, and I don’t know how you do this with your voice. I think musicians in Eritrea are always true to their roots. The instrument they use and the way they sing is all culture. That is what I like about Eritrea. Many musicians forget about culture and tradition but Eritreans don’t.

How did Eritreans like your music when you performed here?
It was really amazing. I didn’t expect such a response since I came from Uganda and for they never have my music here. But the Eritrean people, I think when they hear something good that they have never had it before they savor it. And that sort of shows that they’re into it. If you don’t sing well, I don’t think they will give you any response. They don’t know the type of music I play, but they appreciated it here and I’m really happy about that.