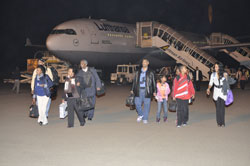 The flocking of Eritrean citizens residing abroad to the Homeland to participate in the Independence Day celebration is continuing.

Asmara, 18 May 2011 – The flocking of Eritrean citizens residing abroad to the Homeland to participate in the Independence Day celebration is continuing.

The arriving citizens said that although they have been celebrating Independence Day in the respective countries of their habitat, participating in the even amongst the people and in the Homeland provides extra satisfaction.  They further explained that their participation in the great event would give added color to the celebrations, while conveying strong message to the outside world.

Ms. Almaz Debesai, an Eritrean living in Germany, stated that independence is the outcome of bitter struggle and the heavy sacrifices of the Eritrean people.

Likewise, Ms. Denait Mihreteab, Mr. Gilom Mulueberhan and student Million Tewolde, all of them nationals residing in the US, noted the significance of the Day and added that this year’s celebration is quite special as it is being marked at a time when the nation is standing on solid ground.