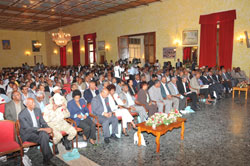 The Central Region is the smallest of Eritrea’s six regions. Including Asmara, this region has 84 villages. The total area of the Central Region covers 1092 sq.km.  A Symposium of Central Region Administration that was conducted fram 10 to 11 of May at Asmara Municipality Hall was opened with musical performance of Yatana and Wari music groups. The songs staged reflected Asmara’s beauty as well as tidiness

Administrator of the region, Mr. Kahsay Ghebrehiwet highlighted the overall developmental activities carried out in the post independence period. The Administrator described the development activities carried out setting up service rendering institutions. Through such undertakings, 95% of the rural area has become beneficiaries of potable water supply, among other vital services.

The Department of Economic Development in the region discussed the varied accomplishment carried out in different sectors. Marine Resource Ministry’s branch office in the Central Region has been engaged in the development of aquaculture at different dams. Fishing activities has been flourishing from ground zero since the wake of independence with the opening of fish market places in different parts of the region and particularly in Asmara.

Taking into account that fish deficits may occur in the breeding seasons between June and October, aquaculture activities has been carried out in the four sub-zones of the Central Region. Most of the dams in Serejeka, Berik, Gala-Nefhi, and Asmara sub-zones are conducive for aquaculture undertakings with little expenses and with simple technological facilities. This time, aquaculture is being practiced in 19 of the 77 dams in the region. Dams of Himbrti, Hayelo, Mai-Nefhi, Beleza and Adi-Shaka are good examples of such undertakings. Long-term plans charted out to be carried out are the introduction of aquaculture among farmers, initiate community-based fishing and sports fishing activities.

As for tourism activities the Central Region possesses good weather condition, a number of art deco buildings, relics that are preserved in their original state; such as trenches, tombs of the commonwealth soldiers, Indian crematorium, steam locomotives and others. Findings of ancient utensils and ornaments in some places of Asmara also indicate that the city was a center of an earlier civilization. In this respect, extensive tasks have been also

accomplished towards creating a viable tourism services. A number of ancient settlements have been also identified in the environs of Asmara and researches have been carried out in each respective area. Varied stone tools, amphora, cave paintings and utensils have also been discovered.

Advances in the cultivation of temperate fruits and flowers in the period between 1991 and 2010 was also disused in the regional symposium. Cultivation of such temperate fruits and flowers, which has been carried out in the villages of Mekerka, Ghesnashim, Shimangus-laeilay, Merhano, Mai-Srwa and other places, has shown substantial advances since 2000 in the amount of productions for local market and for export. Hence, apple, strawberry, olive oil tree, grape, passion fruit among other types of fruits and roses, san flower, and generally about 15 types of flowers have been cultivated. Such cultivations have been widely introduced in Adinifas and Gobo-Ayteabr in the period between 2000 and 2009 respectively. A costly freight expense was also mentioned in the symposium as a major challenge that has been negatively affecting the provision of fruits and flowers to
international markets.

At present almost any kind of disease has been treated effectively. Maternal and children mortality rate as compared between 1993 and 2010 has substantially decreased. For instance maternal mortality rate which was 500 per 100,000 births in 1993 was decreased to 46 per the same birth rate in 2002.

The department of infrastructure services of the Central Region was restructured to meet construction demands. This department has since 1991 been engaged in planning, implementing and monitoring varied infrastructural implementations. Keeping the inherited architectural beauty of Asmara and expansion of the city has been the major tasks of this department.  Renovation of roads, erection of traffic lamps and providing electric supply to different villages in the region was also implemented on the ground.

Public transport service was at a very poor condition in the first year of independence. There were also hardly any good infrastructural facilities. However in the post independence period, along with the expansion of roads route, 95 new urban buses and 75 mini-buses, 807 taxis that were introduced since 1993 have almost solved the existed deficits of transportations services.

Access to basic education in general and to a higher level in particular, have been broadly expanded to the entire region. Since 1991, around 105 educational institutions that cover kindergarten, junior and secondary schools have been constructed throughout the region. Eight schools are also under construction.

The construction of Tokor dam in 1999 was a major development in water supply. Following the construction of this dam old pipeline motors and 200 km water tubes were replaced and around 42 km of sub lines were construction. To secure water supply in the eastern escarpment of the region, fog-harvesting programs have been in the process of implementation.

All in all, service rendering institutions has been substantially increased in all sectors. Of the existing 77 water reservoirs, the 29 are constructed in the post independence period. In the development of irrigation based agriculture an activity, the region has so far been cultivated around 46 hectares and around 135 hectares are prepared for cultivation.

Rad’oyta : Game of the Youth