Rad’oyta : Game of the Youth 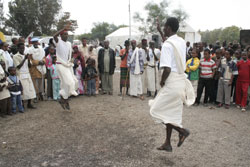 Although there is no concrete evidence as to how and when the game came to be, it is one of the most frequently played games especially during traditional festivities. A due credit is given in the society to someone who represents his village in the game, as it requires so much stamina and tests one’s endurance.

Even though the number of players taking part in the game varies from region to region, usually, teams are composed of seven players each. And those who play the game are ages 14-30.The ball used in this game is made from camel mane and a desert plant called “ayelayto.” The ball is made from the leaves of the “aylayto” plant and has the ability to bounce. To make it, the Afar first collects the leaves of the plant, and then they sew it in a circular shape using a cotton cloth.

Sometimes the ball is also made from human hair, in rare instances in which no camel mane or Aylayto can be acquired. A player with an afro-textured hair will be chosen and his hair will be shaven. The hair of the player will be prepared the same way as the leaves of the “ayelayto” are prepared to be a ball. This is due to the belief the inhabitants of the area have that a ball made from the hair of a youngster can bounce more than the ball made from hair of an elder: in addition members of the Afar believe that a ball made from the hair of an elder can create accidents during the game.

The two referees of Rad’oyta act as both as a referees for the game and players in the game.   Rad’oyta is a game played by hand, it is similar to American Football, during the game the task of the teams,  whether to defend or attack is decided by the referee. The attacking team play to score where as the defending team scores on the number of the scores it defended. The game is played with speed and tactic; it also requires great stamina to catch the ball thrown with great force from the attacking team.

Rad’ oyta has no definite courtyard and time limit, the game is usually begins in the afternoon and is terminated with the coming of darkness. The player that scored more points will get the title “halem”.
The spectators in Rad’oyata are also participate in the game, for example when the player is bouncing the ball with his hand and a spectator catches the ball from dropping the player wouldn’t lose a point.
Although Rado’yta is disappearing game among the Afar, it need to be conserved as it a unique traditional game as it is an amazing game to watch.

There are times where death can be caused during the game and at those times the matter is settled through the traditional elders of the society.